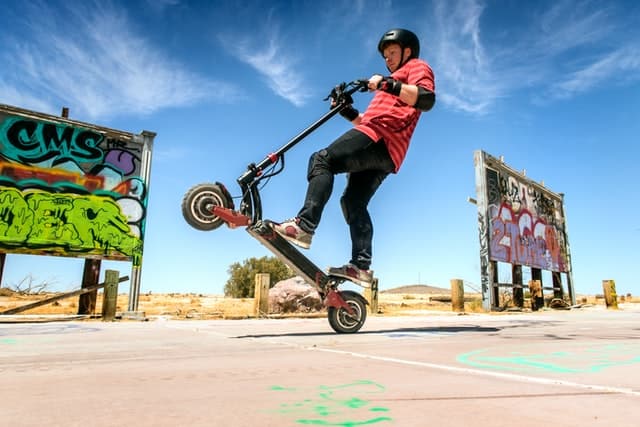 Electric scooters are fun, simple, and generally intuitive to start riding. The learning curve is minimal, at least when you first hop on.

But in the long run, electric scooters are actually harder to ride than you might expect. That may come as a surprise, given how easy it is to get started!

This article will take a quick look at challenges that new riders may not realize they’ll face.

None is a deal-breaker, in my opinion, but it’s always better to know what you’re getting into!

Here’s whether electric scooters are hard to ride

Electric scooters are easy to ride on smooth, straight routes. They may be hard to ride in other situations, because the small wheels are susceptible to rough terrain, the braking isn’t always predictable, and some new riders find their handling twitchy and unintuitive. Standing for a long time also becomes uncomfortable.

These challenges are more pronounced with entry-level scooters and public rentals, which tend to have the smallest wheels and poorest braking.

But are electric scooters easier to ride than bicycles? It’s far easier to learn to balance on an electric scooter than a bicycle. You’ll be almost immediately at ease with the scooter’s low center of gravity and natural, upright stance. And while electric scooters don’t require fitness like a bicycle does, they do require extra handling skills (due to small wheels) and throttle control skills to stay safe.

In other words, while scooters are certainly not hard to ride, they are harder than you’ll usually hear.

They’re not inherently difficult; there’s just a more limited range of settings in which they’re easy.

And after owning and renting several scooters myself, here’s what I’ve observed.

1. Acceleration may be too easy

To my knowledge, all scooters have an “eco” mode that greatly limits speed and acceleration.

It’s perfect for raw beginners, but eventually, getting a useful amount of speed and acceleration requires switching out of eco mode.

However, without that restriction, new riders can easily find themselves traveling too fast for their surroundings, skills, or familiarity with the scooter.

At the push of a button—literally—you’re zipping down the road.

There’s no doubt that’s fun and useful, but sometimes it’s a little too much of a good thing.

Interestingly, whereas entry-level scooters and public rentals have less power, many have poor throttles that are hard to modulate. They’ll have a more “on-off” feel, where power is essentially none or full, with little gradation in between.

In my book, that’s one of the biggest reasons why it’s worth buying your own scooter!

2. They can be challenging on rough terrain

Smaller wheels aren’t as smooth as larger ones.

What might be less obvious is that wheel size matters even more as speed increases. That’s because higher momentum raises the stakes of hitting a stone at a bad angle, catching the edge of a curb, and so forth.

For one thing, it simply requires technical skill on terrain than you wouldn’t think twice about while walking.

What’s more, electric scooter riders need to devote all this extra attention to the ground even while minding traffic and pedestrians.

All two-wheeled vehicles involve what’s called countersteering. I’ll defer to Wikipedia if you want to geek on the physics, but in brief, you can’t turn without first leaning your center of mass into the turn. And achieving that lean requires a very subtle turn in the opposite direction.

In other words, to turn a scooter/bicycle/motorcycle to the left, you first turn the bars slightly right for just a faction of a second.

We all do this intuitively on bicycles, but it can feel touchier on scooters (again due to the smaller wheels).

Without that intuition, new riders often swerve by turning the bars like a car steering wheel…which inadvertently sends them in the opposite direction (and quite possibly into an obstacle).

In fact, that sensitivity to speed is one reason motorcyclists practice throttle control through corners before going out on the open road.

4. The upright position can get fatiguing

The upright standing position of an electric scooter is convenient and intutive. You hop on and ago, plain and simple!

But have you ever tried to stand in place while slightly twisted, for 15 or 30 minutes, without moving your feet?

You might notice a little ache in your back, a twinge in one knee, or the other peculiar ways your body says, “I’m not exactly meant for this.”

And so it goes on electric scooters.

Although their stance is similar to skateboarding or snowboarding, there aren’t the same big, dynamic movements to shift weight around and recruit different muscles while others briefly relax. So, after a few miles, the initial convenience of standing may give way to fatigue.

It’s immensely helpful to shift your feet around whenever stopped, but there’s no escaping the fact that standing in place gets old.

It takes a lot of practice to master hard braking or emergency stops on an electric scooter.

It’s obviously best to avoid the need for a quick stop in the first place. But when there’s no alternative, you need to crouch down to minimize the likelihood of going over the handlebars. Most people don’t naturally do that, so it requires building a new habit through deliberate practice (in safe, open surroundings).

Under hard braking, the front wheel wants to stop, but your momentum (which is centered up near the handlebars) wants to keep going.

That creates a feeling like you’re about to go over the handlebars! The front wheel will generally skid before that happens, but the feeling is disconcerting.

Read this guide to electric scooter brakes for more details about what braking systems are available and how they compare in terms of safety and ease.

All scooters share challenges related to standing upright, getting used to countersteering, and proper emergency braking. Those are inherent to their design.

Until you’ve gotten some miles under your belt, it’s hard to imagine exactly how they affect the riding experience.

But other challenges, like the ones resulting from wheel size and throttle control, are much better at slightly higher price points.

The Ninebot Max (hands-on review here) is one of the easiest scooters to ride in the sub-$1,000 price range, and I’ve covered a few other terrific choices in the mid-range and upper-end sections of this buying guide.

In summary, electric scooters are fundamentally easy to ride in the conditions they’re intended for. Beyond that, however, they quickly become difficult.

They lack the versatility of most bicycles, but their effortlessness is still great for commuting and urban transportation in general.

Just keep in mind that if your local streets are particularly torn up, then you’ll need to spend significantly more for a scooter that can safely tackle them!