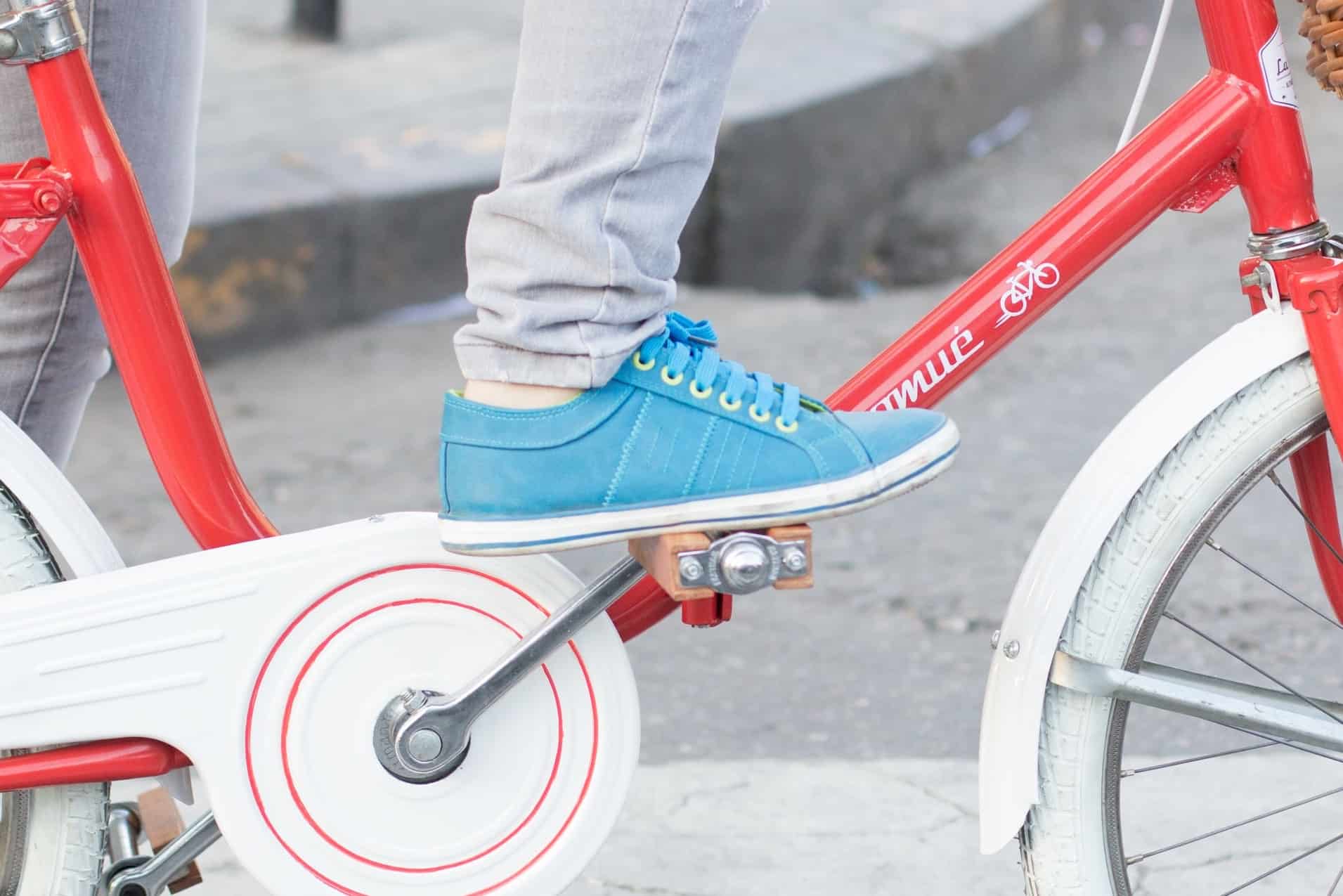 Pedals are an easy upgrade for confident, all-weather riding. And they’re almost universally compatible these days, so installation is a cinch.

But what in the world should you look for?

Maybe those contraptions that “serious cyclists” clip into? Or some big, gnarly, studded ones that downhill racers users?

There’s a staggering variety these days. And assuming you have better things to do than trying them all…it’s tough to know where to begin.

This guide will cover everything a new bicycle commuter needs to know to pick safe, comfortable pedals that work well enough to just forget about.

First, let’s cut to the chase…

This is the best kind of pedal for bicycle commuting

Flat (platform) pedals are best for most bike commuters. They’re compatible with everyday shoes, and safe and easy for stop-and-go city riding. Choose a broad but thin pedal with studs and/or grip tape for traction. Toe clips may increase traction and power, but they’re seldom necessary.

Clipless (a.k.a. “clip-in”) pedals are not ideal for commuting. They’re better suited to aggressive or athletic riding. They also require carrying or storing a second set of shoes. (Casual-looking clipless shoes do exist, but they’re extremely stiff to walk in.)

Still, you’ll often see commuters with clipless pedals, but that’s not because they’re optimal. Rather, it’s just because many North Americans commute on their training/racing bike.

All in all, flat pedals are ideal for practical cycling because they’re simple and convenient. It’s easier to integrate cycling into daily like when you avoid bike-specific apparel. Riding with standard shoes is a good way to do that.

Yes, those pedals will (probably) fit

Pedal compatibility depends on thread diameter. Almost every adult bike uses 9/16″ threads, so that’s what nearly all aftermarket pedals also have. This is the case for all three-piece cranks, which look like this:

Kids’ bikes and low-end BMX bikes usually have 1/2″ threads. They show up on cheap, recreational adult bikes, too. In any case, they’re identifiable by their one-piece cranks, as pictured.

There have been other, more obscure pedal standards over the years—especially on French bikes, because, well…French. But unless you’ve got out of your way to find a quirky vintage bicycle, they’re not worth worrying about.

If your cranks look like the first picture, then you can almost certainly use whatever pedals you like. And if in doubt, a bike shop can easily confirm.

Flat pedals: what you need to know

How many kinds of flat pedals are there? There are basically two styles, with many variations on each. Platform pedals have a particularly broad surface for support, often with grip tape, small metal studs, or set screws for extra traction. Quill pedals are similar, but with a thin metal cage in place of a thicker metal or synthetic surface. Most quill and platform pedals can accommodate toe clip, foot straps, or both.

These days, high-end flat pedals can be either metal (often aluminum or magnesium) or a synthetic material (like nylon or a sturdy plastic). The material doesn’t necessarily indicate quality. Although the very cheapest pedals are generally plastic, high-end ones come in many materials.

However, they may be hard on leather-soled shoes. Grip tape (like you see on skateboard decks) is a gentler option that still has plenty of traction for casual, wet-weather riding.

Can you use flat pedals on a road bike? You can use flat pedals on any road bike with compatible threading (which is nearly all of them, these days). Many commuters and recreational install flat pedals on their road bike because they don’t need the extra power that clipless pedals enable. Flats are also more convenient since no special shoes are required. You’ll just find it a little harder to “dig in” during sprints and vigorous climbs without your feet clipped in.

Does shoe choice matter with platform pedals? Platform pedals don’t require special shoes, but you should try to wear a pair with stiff, rubbery soles. The stiffness helps support your foot and distribute forces while the rubberiness enhances grip (especially in the wet). But if you want cycling to be part of daily life, then it’s more important to find pedals that suit your everyday shoes, not the other way around.

Clipless pedals seem ironically named, since your shoes do in fact clip into them. But “clipless” actually has nothing to do with that snap-in mechanism.

Rather, it means they don’t have toe clips (the straps that some cyclists attach to their flat pedals for more power).

Racers had used toe clips for many decades, so when a new design emerged that held their feet in place without clips, the name “clipless” just stuck. The idea of clipless pedals actually dates back to at least 1895 (source), but they weren’t refined or readily available until the 1980s.

Anyhow, the idea is simple:

In their simplest form, clipless pedals have nothing but the clip mechanism itself. These Cranks Brothers Egg Beaters are a popular example that used extensively in my mountain biking days.

As you’d imagine, they’re not pleasant with regular shoes!

Some clipless pedals try to split the difference, with use a platform on one side and a clip on the other.

It’s a clever idea, but I don’t recommend them. In real-life riding, you’ll step on the wrong side of the pedal about the half the time!

What exactly is the point of clipless pedals? When your feet are attached to your bicycle’s pedals, one can pull up while the other pushes down. You can also push at the top and pull at the bottom of the pedals stroke. That means more power output, especially when sprinting.

Some fixed-gear riders also prefer clipless pedals. That’s partly for uphill power since they can’t shift gears, but mostly because they have to spin extremely quickly (coasting is impossible) on the way back down.

Are clipless pedals useful for commuting? They’re not useful for most bike commuters. Clipless pedals are mostly helpful for sprinting and on rough terrain, which most commutes don’t involve. They also require special shoes that may be impractical to use.

Exceptions probably exist, but platforms are best unless you prefer to treat your commute as a training ride, or perhaps if you ride a fixed-gear bike.

Are clipless pedals dangerous? If you’re new to riding with clipless pedals, it’s easy to fall at very low speeds until you’re adept at unclipping. Unclipping does become quick and intuitive with practice, but it’s important to get that practice away from traffic or obstacles.

Arguably, clipless pedals are safer on rough trails because they prevent an unexpected bump from bucking your feet off the pedals. But that’s obviously not a scenario most commuters or urban cyclists need to worry about.

Can I ride clipless pedals with regular shoes? It’s possible to ride clipless pedals with any shoes, but they’re inferior to platform pedals if you’re not actually clipping in. Most have a tiny platform (or none at all), so there’s very little traction. And because the contact point is so small, it can painfully concentrate all your pedaling force in one tiny area of your foot.

How to position your feet on the pedals

The position of your feet on the pedals makes a surprising difference. Correctly and positioning gives you better grip, better support, and even a little more power.

Pro tip: if your saddle randomly feels like it’s the wrong height (but nothing changed), make sure your foot position isn’t moving around. A difference of just 1″-2″ forward or backward can make a previously good saddle height feel off. It affects your knee extension, which is just one of the reasons your bike might feel slow when nothing’s mechanically wrong.

Anyhow, it’s best to place the ball of your foot roughly over the spindle (the center rod) of the pedal.

You can recognize that spot because it feels more solid underfoot than the rest of the pedal; it’s easy to identify with just a bit of practice.

For one thing, it makes it easy to straighten your ankle for a little extra push after the bottom of a pedal stroke. It’s like standing on your tip-toes—which is actually standing on the ball of your foot.

(That same ankle movement helps you absorb bumps when standing up, too.)

What’s more, it keep the widest and most convex part of your shoe in the center of the pedal, which means maximum grip.

With clipless pedals, you’d have to play around with the clear until it clipped you into exactly the right position. But with flat pedals, simply adjust as you go.

Pro tip: on flat pedals, you can subtly move your feet to change which leg muscles are emphasized while pedaling. It’s not a night-and-day difference, but try it next time a climb is taking a toll on your quads.

The best flat pedals for commuting have a few things in common:

Note that weight is not a criterion. Manufacturers like to brag about their pedals’ lightness, but as long as they meet the above criteria, it’s completely irrelevant. (And for commuting purposes, this applies to almost all other components!)

Below are three great examples of very different platform pedal designs. Most people will strongly prefer one over the others, but all are good in their own right. (And, if availability is a problem, substitutes shouldn’t be hard to find.)

For most bike commuters & city cyclists: VP 836 (or similar)

Composite pedals with grip tape are the best choice if you ride in a variety of everyday shoes—especially ones with leather soles. They can be surprisingly hard to find, since this style is usually a stock part rather than an aftermarket one.

This specific pair from VP Components may or may not be available when you read this, but it’s a perfect example of what to look for. Your local bike shop may be able to special-order something similar.

The one disadvantage is this style of pedal almost never has sealed cartridge bearings. They may need replacement after a couple years of riding, especially in wet weather.

But on the whole, they’re my personal choice.

True, they won’t hold your feet in place while hammering out a sprint over rocks and roots. But if that situation arises during your commute…something has probably gone seriously wrong!

(Update: here is an alternative that claims to have sealed bearings. The brand is obscure, but it’s hard to go wrong at this price.)

Sometimes it’s just too painful to stick a modern, synthetic part on a beautiful, classic-looking Rivendell or some other traditional city bike.

In those cases, Japan-based MKS has you covered with their Sylvan Next pedal.

It probably doesn’t look wildly different from your stock pedals, but the large cage makes for a spacious platform. The small “teeth” on the edge of the cage have a bit more grip that this style usually gives.

And, as befits this price, the fit and finish are as fine as it gets.

(There’s also the original Sylvan, which is far cheaper and functionally identical, but lacks cartridge bearings. Personally, I’d spring for the Next to ensure a long, maintenance-free, friction-free life.)

These are wildly popular downhill and freeride MTB pedals, but commuters—including myself at times—appreciate the incredible traction and ultra-low profile for urban riding, too.

“Sturdy” would be an understatement, seeing as they were design for people whose idea of fun is riding off of cliffs. The nylon-based body is practical unbreakable, and the traction pins and cartridge bearings are easily replaced.

They’re overkill for most commuters, but might be just the tick if you regularly ride in mud or snow.