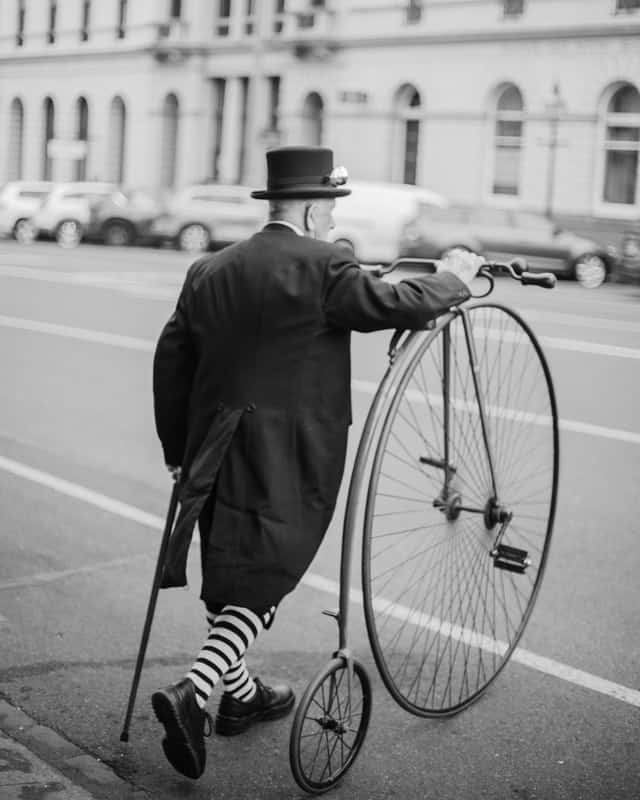 As a new (or new-ish) cyclist, you’re trying to make cost-effective choices on several levels.

“Is that new bike worth the price? Should I just fix mine? Do I really need that nice of a pannier? Could I get away with my ‘normal’ jacket?”

But the real challenge isn’t weighing upfront cost versus benefits. Rather, it’s figuring out how much this these things will truly cost over time. After all, if you can spend twice as much for a bike that lasts five times as long, it’s a bargain!

For bikes themselves, it’s a little complicated. All parts have different lifespans, but are usually easy to replace.

We all want to spend wise and avoid unnecessary headaches, so let’s take a closer look at what really affects a bike’s lifespan.

How long do bicycles actually last?

Some bicycle components last for 6-12 months of daily use, whereas frames and forks may a lifetime. It’s a wide range that depends on conditions, maintenance, and the individual rider. However, cyclists who prefer cutting-edge designs and technologies may consider their bikes obsolete every couple of years.

Mileage and weather make an enormous difference. You might avoid significant maintenance for years by sticking to brief rides in dry but not dusty conditions. But the exact same bike may need replacement parts and extensive maintenance multiple times per year if ridden for long, daily commutes in wet, gritty conditions.

How many miles can you get out of a bicycle? There’s no limit to how many miles a bike itself will last, but individual parts wear out at different intervals. Just for example, you might need to replace a chain every 1,500 miles, tires every 3,000 miles, but bottom brackets once every several years.

If you replace these wear-and-tear parts as needed, then your bike can last essentially forever…assuming it doesn’t develop cracks or suffer major damage in a crash.

Below are some very approximate lifespans for major components, based on manufacturer documentation and my own two-plus decades of firsthand experience.

These assume at least mid-range parts, proper day-to-day care (like chain lubrication), and riding on mostly street/path/smooth dirt. Ranges are even wider for off-road riding due to the huge varieties of conditions and of riders’ aggressiveness.

It’s also important to understand that heavier or more aggressive riders will get fewer miles out of the exact same part. When you exert more torque on the drivetrain and more weight on tires and bearings, they simply wear out sooner.

What is high mileage for a bicycle? You could say a bicycle is “high-mileage” after 10,000 miles or more. At that point, all drivetrain parts and tires have probably been replaced at least a couple times. That may equate to 2-5 years of regular use.

But practically speaking, cyclists don’t often think in those terms, since not all miles are created equal. For instance, 1,000 miles of wet gravel roads with a big rider and heavy cargo might cause more wear than 5,000 miles of a child cruising down a sunny street.

What’s more, mileage is less of a concern with bicycles or any other non-motorized vehicle. Bicycles have no engine, no automatic transmission, and (usually) no complex electronics, so high mileage rarely causes the devastating problems that plague cars.

How long do cheap bikes last? Cheap bikes, like the ones from department stores and big-box stores, often have problems during the first few riders. If that happens, it’s usually because of improper assembly, not necessarily the bike’s quality.

However, many ultra-cheap bikes also have shoddy internal parts, like headset or hub bearings. Those may have issues in a few months that better bikes don’t have for years.

Fortunately, the threshold for “better bikes” isn’t too high. We’re talking just $500, give or take, to buy an inexpensive bikes from a major brand at a bike shop. Bikes like that should last a typical commuter or recreational rider 6-12 months with no maintenance besides chain lubrication, tire inflation, and cable tension adjustment.

Can a bike last forever? If a bicycle is ridden regularly, then it probably can’t last literally forever, but it should last several decades with proper care. You’ll need to replace many parts along the way, however. A steel bike has the greatest potential (not guarantee) of lasting forever because it’s highly resilient and repairable.

How often should I replace my bike?

You don’t need to replace your bicycle unless it has serious frame or fork damage. Even then, steel and carbon bikes may be repairable if there are no dents, rust, or corrosion. However, it’s worth replacing if it doesn’t suit your needs or preferences anymore, and modifying it would be difficult or cost-prohibitive.

Many cyclists prefer tried-and-true components that have not significantly changed in the last couple decades. That rules out high-performance, racing-influenced features…but it also rules out obsolescence and ever-changing standards.

Conversely, others simply prefer to have all the latest and greatest components, so they upgrade every couple years. That doesn’t mean you should; that’s just how often most types of bicycles see meaningful changes.

Do bike frames wear out?

Yes, bike frames can and do wear out, but it’s not inevitable. This usually happens in the form of a crack near a weld or joint. It’s likelier with aluminum than with other materials, although design, construction quality, and use matter more than material.

Better manufacturing techniques are making bikes more durable, too. And for every report of a massive frame failure after just a few years, there’s someone else who still rides a bike from the 1970s.

How long do aluminum bike frames last? About 10 years is a good rule of thumb, but it’s extremely variable. Some may fail in a few years whereas others can last decades.

Unlike other frame materials, aluminum accumulates fatigue with use. At some point, the accumulated fatigue may be enough for it to break.

This happens even without visible damage. Even gentle, unremarkable forces still cause the gradual fatigue that predisposes aluminum to breaking (source).

Gentler use can delay breakage for decades, but it does have a finite life. Whether you own the bike long enough to reach the end of that finite life is harder to predict.

(By the way, this is why touring bikes and traditional city bikes are almost always steel. They’re expected to bear loads reliably for years—or even decades.)

Some cyclists believe that aluminum develops a “dead” feeling after several years of use. It’s often described as a lack of springiness that used to be present. I’ve never detected it myself, but many cyclists are adamant that they have.

How long do steel bike frames last? Well-constructed steel bike frames can last forever. That’s because steel (and titanium) has a fatigue limit, which means it can endure any duration of any force that isn’t strong enough to bend or break it immediately. In other words, unlike aluminum, steel doesn’t inevitable fail because it can’t wear out per se.

Now, steel can and does break anyway. But that’s not because of accumulated fatigue; it’s because of construction or use problems like overly lightweight tubing, overly aggressive riding, or poor welding.

How long do carbon fiber frames last? Carbon fiber does not have a limited fatigue life, either, so it could theoretically last forever (source) as long as it’s not subjected to breaking forces.

While researching the warranty information below, I was surprised to learn that many manufacturers now offer lifetime warranties on carbon frames and forks. (Of course, that assumes it’s used for its intended purpose…and plenty of other caveats.)

That was unheard-of for quite a while, and it attests to how mature and downright good carbon-fiber construction has become.

However, carbon fiber may have a limited practical life, since it’s more brittle than aluminum or steel and easier to crack with moderate side impacts. It can usually be repaired, although repair services are hard to find in many places. Keep in mind that minor carbon fiber damage may be hard to see, since the material can’t bend or be dented.

Do bikes have a lifetime warranty?

As of 2021, many bicycle manufacturers have lifetime frame and fork warranties for the original owner. Not all brands do that, however. Note that frames, rigid forks, and components usually have different warranty terms. They also vary by country, and are void if the bike is modified or is used beyond its intended purpose.

Manufacturer warranties give some sense of a frame’s typical lifespan, but it’s not an exact science. A longer warranty doesn’t mean one brand is necessarily more durable, nor that it will actually last your whole life. It may just come from a less risk-averse legal department, or from accountants who assume you’ll sell it before problems arise! (Remember, lifetime warranties only apply to the original owner—with bicycles or just about anything else.)

With that said, here are the warranty periods for some major brands, as of 2021. (“Forks” means rigid forks. Suspension forks are almost always from another manufacturer.)

All the above assume you purchased your bike new from an authorized dealer, and registered it with the manufacturer. Those factors usually qualify you for warranty coverage and/or extend the coverage. Note that some brands have different periods for different frame/fork parts, especially on full-suspension bikes.

Needless to say, the warranty is usually void if you modify the frame/fork or if you ride the bike beyond its intended purpose. Different terms may also apply in different countries.

As always, confirm these details with the manufacturer.

Is my bike worth fixing?

Your bicycle is worth fixing if it’s comfortable, it meets your needs, and it’s not from a big-box-store or other extremely bottom-tier brand. However, it’s not worth fixing a bike with a cracked, dented, rusty, or corroded frame.

Always ask your bike shop for an estimate, since extensive parts and labor often cost more than a new bike.

Most bike shops charge around $60-$100/hour for labor. Most also have have fixed prices for common services, like installing specific parts or performing a general tune-up. In most cases, you’ll also need to pay the retail price for any parts or accessories used.

If multiple parts of your bike need replacement or major repair, then it’s easy to rack up a bill of several hundred dollars. In fact, it may approach the price of a worthwhile hybrid bike (or something similar), which will include a warranty and, often, a year of free tune-ups from the shop. Again, it’s worth getting an estimate before you commit to having your bike fixed.

If it’s more cost-effective to replace your bike, but your old one isn’t worth much before repairing, that doesn’t mean it’s relegated to the dump. Many charities accept repairable bikes that have seen better days, do the work, and donate them to those less fortunate. Seattle’s Bike Works is a relatively well-known one, but there are countless others around the world.

A well-maintained bicycle can last an extremely long time. “Forever” is optimistic, even with a lifetime warranty. But a steel frame from a reputable brand, combined with regular maintenance, should keep you rolling for decades.

You’ll need to replace wear-and-tear parts relatively often. Whether your bike costs $400 or $4,000, some parts are simply supposed to be replaced.

If you want a long-lasting bike on a budget, then check out traditional steel-frame city bikes like the Brooklyn Franklin reviewed here. And is price isn’t a priority, then you can have your pick of boutique brands for fancier models that may well last a lifetime.