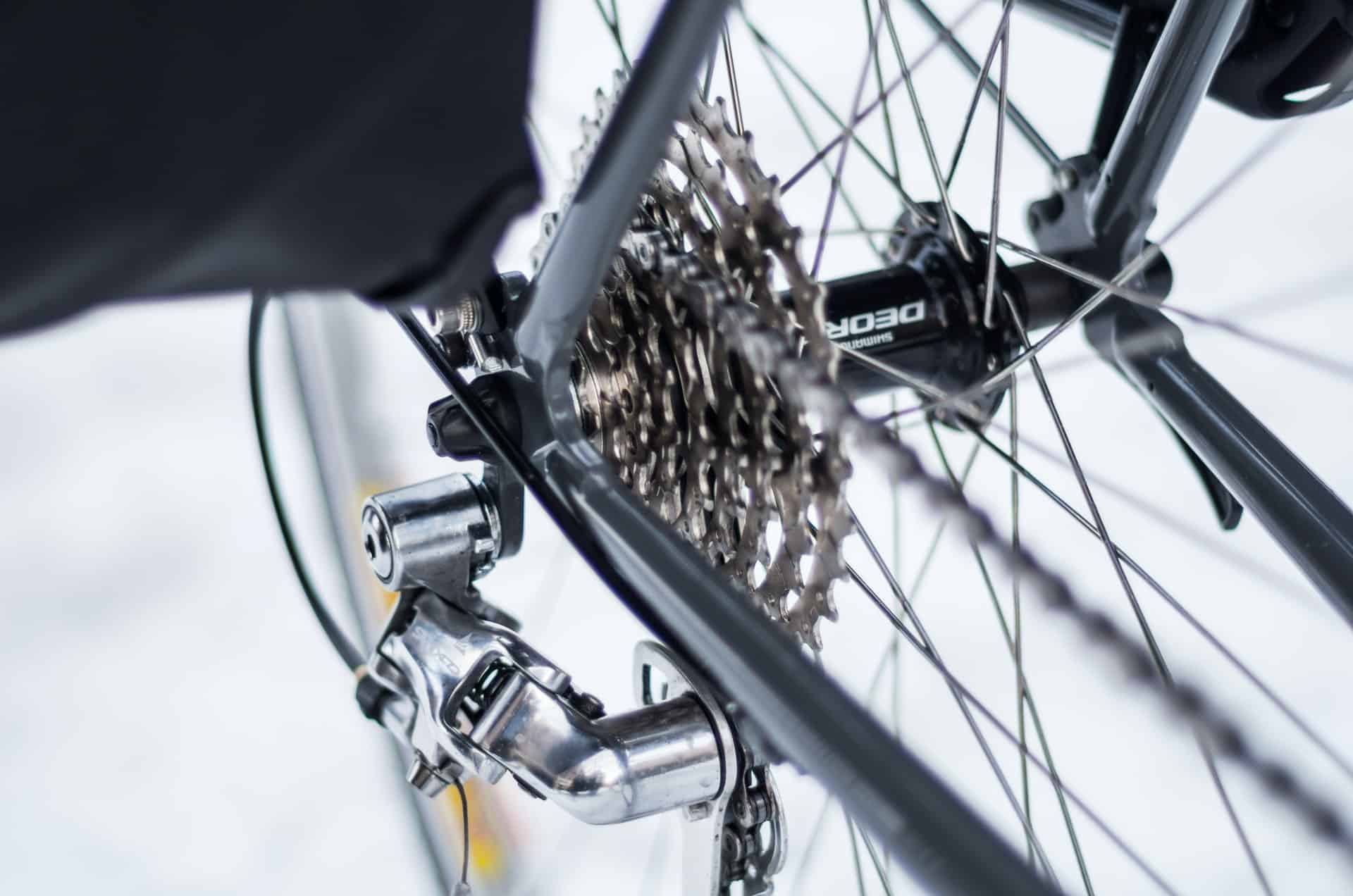 The derailleur is a beautifully simple device.

These days, even budget ones are more reliable and precise than anything professional riders could get just a few decades ago.

However, they’re not perfect. While derailleurs are affordable, and easy to service, they’re also a bit finicky and vulnerable to impact.

They pack anywhere from 2 to 14 gears inside a sleek, weather-tight hub that can go thousands of miles without maintenance. However, they cost more than a derailleur drivetrain, and can be complicated to service.

IGH-equipped bikes aren’t rare in North America, but they’re nowhere near as common as in Europe.

Are hub gears better than a derailleur?

Neither is categorically better, since they have major trade-offs that suit different uses.

IGHs need minimal maintenance, are impervious to weather, and can shift while stopped. But they cost and weigh more, add friction, and are very hard to repair. They’re ideal for urban riding, when reliability and shifting at a stop are high priorities.

The bottom line? After riding both IGH and derailleur drivetrains for many years on multiple bikes, neither is a clear-cut winner.

This article will explore those trade-offs in detail.

Both run the gamut from questionable to extremely high-end quality, so it’s hard to compare shifting quality across the board.

Both also need proper maintenance to keep working as intended, which we’ll come back to later.

IGHs shift when not pedaling

Derailleurs can only shift when the chain is moving. They only push/pull the chain on top of the next gear, so that gear’s teeth have to catch it to complete the shift.

Internally-geared hubs don’t move the chain at all, so they can shift when stopped. In fact, it’s important to shift when you’re coasting or stopped.

That’s because IGHs shift by realigning a set of small planetary gears, which in turn changes the gear ratio. If you pedal while shifting, you’ll exert force on the gears before they’ve settled into place. The hub can probably withstand that, but it does create premature wear, so it’s best to break the habit.

Yet many urban cyclists love IGHs for exactly that reason. We may need to stop unexpectedly in a high gear, and down-shift to start again. That’s tough with a derailleur, but effortless with an IGH.

But this can pose a problem on very steep or rough climbs, where stopping pedaling at all means you’ll also stop moving. That’s seldom a problem in the city, but it’s a strike against IGHs for trail riding.

Derailleurs work with all types of shifters: trigger, grip (twist), integrated (“brifter”), and all sorts of bar-end and downtube variations.

(Note that individual derailleur and indexed shifter models may not be compatible, since cable pull ratios vary. It’s especially tricky to mix mountain components with road/all-around components, even if they’re from the same brand.)

The vast majority of IGHs have a trigger or grip shifter. Some IGH manufacturers also sell indexed bar-end and downtube shifters, but those are uncommon.

To my knowledge, no brifters are readily compatible with IGHs, although I’m sure some intrepid mechanics have made them work.

Friction shifters of any style are technically compatible with IGHs, but much harder to use. That’s because you know you’ve shifted properly based on a) the shifter clicking and or b) the chain settling into its new gear.

But a friction shifter doesn’t click into place, and an IGH doesn’t even move the chain. Without that immediate feedback, shifting would be unnecessarily vague.

Derailleurs have wider gear ranges for the price

Derailleur drivetrains generally have more gears over a wider range than internally-geared hubs. However, wide-range IGHs do come close. Both can offer more range than most urban terrain requires.

All the above are enough for a huge range of terrain. And if not, then you can usually replace the cassette and/or chainring(s) to widen the gear range or to move the entire range higher/lower.

The internal planetary gears make the math complicated. Fortunately, we can get the numbers directly from the manufacturers.

Here are the ranges of some common models:

The Rohloff hub offers extraordinary range and is built like a tank for remote treks in who-know-what conditions. It also costs well over $1,000.

Otherwise, the reasonably priced IGHs have ranges like that of a 1×8 city bike. They’re all intended for city riding, that’s to be expected.

The Shimano Alfine 8 is the most expensive IGH that’s still widely spec’d on stock city bikes—usually on models above the $1000 mark, give or take a bit. The Nexus 7 is also common around that price point.

Both offer a little more range than the (roughly) 243% of a 1×7 city bike, but far less than the 400%+ of any modern bike with multiple chainrings.

However, there’s no need for a wide gear range on rolling, urban terrain. Three to seven speeds are enough for nearly all commuters.

The Alfine 11 offers nearly the same range as any derailleur drivetrain, but it’s rare to see on sub-$2000 bikes.

If hills present a problem, you can always change the chainring or cog size to move the IGH’s entire range up/down.

Just keep in mind that you can’t increase both at the same time. But unless you want to climb steep hills and bomb down the other side at breakneck speed, that’s all right.

IGHs are expensive upgrades (but affordable off the shelf)

Rear derailleurs from major brands range from about $20 to over $200 (but electronic shifting costs hundreds more). IGHs are roughly $100 to $500. That all excludes cassettes/cogs, shifters, cables.

Front derailleurs are about half the price of rear derailleurs, at $10-$100, but they’re not always necessary.

Most IGH-equipped bikes only cost $100-$200 more than derailleur-gear models of similar quality. They’ll usually have fewer total speeds and narrow gear range for the price, but that usually isn’t a problem for city riding.

Upgrading a derailleur to an IGH

If you ride a modern bike that came with a derailleur, then it probably has vertical dropouts, which make it hard or impossible to upgrade to an IGH.

(IGHs are usually designed for horizontal dropouts. There are other solutions for proper chain tension, but if the hub has some sort of anti-rotation tabs/hooks that fit in the dropout, then you’re probably out of luck.)

Anyway, even if technically possible, IGHs are an expensive aftermarket upgrade.

Hubs aren’t easily swapped, so you’ll need to replace the entire rear wheel or have it rebuilt around a new hub.

Even with an entry-level Nexus 3, this will run a couple hundred bucks after labor.

(Yes, machine-built Nexus 3 wheels can be found for less, but you’ll need budget for a mechanic to tension and true it properly.)

In brief, it’s not a cost-effective upgrade. If you’re considering installing an IGH one day, then you’ll probably save by buying a bike that has one off the shelf.

Check out some favorites I’ve highlighted here for ideas!

Derailleurs require frequent but trivial adjustment. They’re vulnerable to impact, but are relatively cheap and easy to replace if needed. Internally-geared hubs should go thousands of miles without maintenance, but they’re complicated and expensive to service when necessary.

Note that bikes with IGHs usually have horizontal dropouts, which make it harder to deal with wheel removal and chain tension. With a derailleur drivetrain, the wheel simply slides out and pops back in.

Keep in mind that both drivetrains use metal shifter cables. Those stretch over time and therefore require adjustment. It’s a piece of cake—rarely more than turning a barrel adjuster—but there’s no escaping it.

Which is more durable? As a commuter or urban rider, it’s rare for impact to damage a derailleur. Mountain bikers deal with that frequently, but there aren’t enough boulders and logs to cause that problem around town.

Likewise, it’s exceedingly rare for derailleurs to fail spontaneously, least of all in normal city conditions.

IGHs were infamously unreliable in the past, but modern ones are extremely robust. The catch is that they’re too much of a “black box” for most of us to work on. If an IGH does fail, it’s going to be an expensive repair—if you can in fact find someone to repair it.

Which is more reliable in bad weather? Derailleurs can struggle in harsh weather with ice accumulation or (rarely in the city) deep mud. IGHs are well protected and sealed, so anything besides prolonged water immersion should be a non-issue.

I’ve never ridden through an Upper Midwest winter, but I have to assume a practically weatherproof IGH would make sense in that setting.

Derailleur drivetrains weigh 1-2 lbs less than ones with internally-geared hubs. The difference actually increases with higher-end products, since more expensive derailleurs and cassettes are lighter, but more expensive IGHs get heavier due to additional gears.

However, the weight will exceed 3.5 lbs for a higher-end Alfine 8, versus about 1.25 lbs for a Shimano 105 derailleur and cassette.

Moving from 3 to 8 speeds require several more internal gears and surrounding mechanisms. Unlike the exterior cage of a derailleur, those internal can’t be lightened with exotic metals or carbon fiber.

All told, we’re still talking about a small difference. IGHs add a pound of two, but that doesn’t matter unless you’re competing—in which case a derailleur is the only option anyhow.

As long as your derailleur drivetrain is lubrication—and, obviously, not broken—there’s no noticeable friction to fight. They’re roughly 98%-99% mechanically efficient

Conversely, an IGH contains complex, oiled-bathed gears. All that adds at least a few watts of resistance when pedaling.

How much, exactly? It depends. The direct-drive gear (usually #2 on a 3-speed or #5 on an 8-speed) involves the fewest gears, so it’s at worst a couple percent less efficient than a derailleur.

But in other speeds, which put more gears in contact, IGH efficiency can drop to 90% or less. That means upwards of 10% of your power output goes to fighting the hub’s internals.

(Rohloff hubs are another story. They’re built a little differently and are nearly as efficient as derailleurs. And, coming in well over a grand, they’d better be!)

In any speed, a belt drive will take off another 1%-2% in mechanical efficiency.

All this is clearly a problem for racing, but it’s not a big deal for urban cycling. The difference looks bigger on paper than it feels in reality.

In fact, new or infrequent riders may not even notice it.

But if you’ve just switched to an IGH from a chain drive, you might feel like you’re facing a slight headwind.

Bottom line: is an internally-geared hub worth it?

Relatively few North American bikes have an IGH, so this is an important question to ask yourself before buying. No sense restricting your choices if you don’t have to!

We’ve covered the pros, cons, and peculiarities in detail, so here’s a quick recap of how I’d decide:

An internally-geared hub is a good way to minimize maintenance if you store your bike outside and/or commute in lots of harsh weather. They’re also better for stop-and-go city riding, since they shift while stopped.

But for everyone else, a derailleur is perfectly fine. They’re cheaper and lighter, and they offer much wider range at a given price. Derailleurs need more maintenance, but it’s easy to do, and they don’t have a “black box” of internal gears that could potentially go amiss.