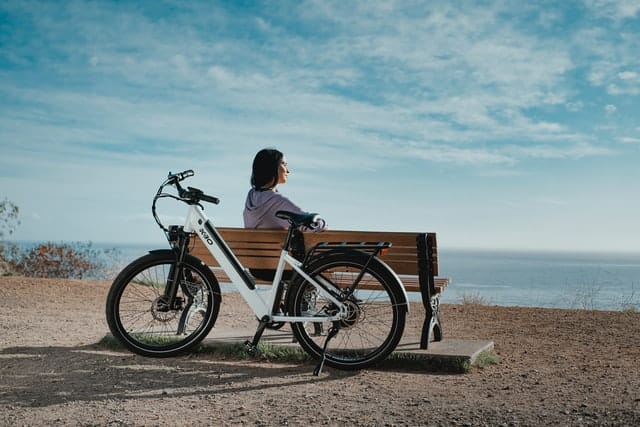 Adding a motor usually isn’t a recipe for fitness.

Several well-designed studies agree that electric bikes are good cardiovascular exercise. They require less exertion than standard bikes do, but still enough to be healthful. Over time, e-bike riders are more active on average. Remember, you can always reduce the motor’s assistance if you want to work harder.

As a long-time e-bike skeptic, I was as surprised as anybody.

So, whether you share my initial skepticism or you’re long since on board, let’s dig into the fascinating research.

For the exact same route, you’ll do less work with motorized assistance than without.

But perhaps the more important matter is how much less work you’ll do. Is it still enough to be healthy?

Researchers at Miami University (the one in Ohio) published a clever 2021 study on how much the motor detracted from exercise for the same riders and route.

In other words, if a regular-bike commuter switched to an e-bike, what would happen?

They put 30 young people to the test on a 3-mile loop on flat concrete. The baseline was a standard bicycle and the comparison was an electric bike (with two assistance levels).

They used a few different measures of exertion, which you can see in the table farther down this page.

Obviously, the ride was briefer and used less effort (by all measures) as riders went to level-1 and then level-2 assistance.

But here’s the cool part: even with level-2 assistance, it was still enough exercise to meet exercise recommendations for good health.

To understand why, we need to take a detour into how exercise recommendations are standardized.

In others words, what exactly are we comparing to?

What this means for exercise recommendations

The authors used several measures of exertion. The most important one is called metabolic equivalents of rest, or METs. (It’s bolded in the table.)

By definition, you’ll expend about 1.0 MET when doing literally nothing. It’s not an intuitive number beyond that, so below are example of METs for things you already do (source).

The general recommendation is at least 2.5-5 hours a week of moderate activity, or at least 3.0-6.0 METs.

More is generally better, and it’s good to add vigorous activity, too. But this is considered the minimum that helps our bodies function properly and avoid health issues with age.

In this study, e-bike riders average 4.6-5.6 METs, which is well into the range of “moderate activity”—the kind we all need!

So, can you get enough exercise by riding an electric bike? On average, you can get enough cardio by riding an e-bike with low or moderate assistance (under 250 W) for 30 minutes each weekday. You can make it more strenuous by minimizing assistance when you don’t need it.

If you already commute on a regular bicycle, then you’re probably into “vigorous exercise” territory. Motorized assistance will reduce that, but not enough to negate the exercise.

Of course, all this assumes you’re using exactly the same route. Nothing has changed but the bike itself.

In reality, e-bikes are really fun to ride. Hills aren’t intimidating, and sweatiness is easily avoided.

Suddenly, we might bike when and where we didn’t before. Perhaps less strenuous exercise, but a lot more of it.

Wouldn’t that impact our fitness?

Spoiler: yes. And that’s exactly what our next study established.

Let’s cut right to the chase: “Physical activity gains from active travel are similar in e-bikers and cyclists,” say the authors of this 2019 European study.

In other words, for the practical cycling that this site focuses on, most folks will get similar activity (therefore similar health benefits) from electric and regular bikes alike.

As we saw just above, you don’t work as hard on an electric bike, although it’s certainly still moderate exercise. But unlike the previous study, which kept a fixed route, this one measured real-life behavior. Participants simply went about their lives, free to choose whatever trips and routes their bike was most conducive to.

Sure enough, e-bikers averaged 8.0 km per day compared to 5.3 for regular cyclists. Presumably, the ease and/or newfound enjoyment of cycling led to more time on the bike.

But what happens when you switch from a regular bike to an e-bike? Well, overall MET minutes/week did fall slightly: just over 8%, on average. For an already active person, that’s unlikely to make the difference between getting sufficient exercise and not.

(MET minutes is the combination of time and intensity. For instance, 12 MET minutes could be 2 minutes at 6 METs, 4 minutes at 3 METs, etc.)

All the above is important stuff if you’re wondering whether an e-bike helps or hinders your already active lifestyle.

But what if you’re struggling to get those all-important 150 minutes/week of exercise in the first place?

Perhaps you don’t consider yourself fit enough to ride a bicycle at all.

Or perhaps you do…but there’s just no time to exercise. And cycling for your daily commute seems ridiculous, since giant hills or scorching sunshine make it impossible to ride without sweating.

Whatever the case, research shows that replacing a sedentary commute with an e-bike ride is a healthful change.

That same study from 2019 also looked at those who went from sedentary transportation to electric bikes. And sure enough, “those switching [to e-bikes] from private motorized vehicle and public transport gained around 550 and 800 MET min/wk. respectively.”

You might recall from earlier that we all need at least 150 minutes of moderate activity per week. That works out to roughly 500 MET minutes. So, from another angle, these same folks could have transformed from sedentary to (somewhat) active just by getting on an e-bike for daily tasks.

That’s nice and all…

But can e-bike riding measurably improve your health? Yes. If you’re currently inactive, then switching to an e-bike is likely to improve your cardiovascular and metabolic system. According to a 2016 study, changing from sedentary commuting to a moderate e-bike ride can “improve some cardiometabolic risk factors within only 4 weeks” (source).

Naturally, you’ve got to talk to your doctor. I’m just some guy on the internet…and you might have unique circumstances that these results don’t apply to.

But on balance, we have better evidence than ever that electric bike riding is in fact a healthful choice.

If you already get around by bike, then it may encourage longer or more frequent rides, which offset the reduced exertion. Of course, you can always just not use the assistance when you’re game for more of a work-out.

And if you don’t yet ride in daily life, then it’s a terrific way to build gentle, healthful, and sustainable activity into your life.

So get out there, keep safe, and above all, keep moving!

By the way, remember up top where I said was an e-bike skeptic? Well, a visit to Rad Power Bikes‘ Seattle flagship changed my mind. Test-riding the RadRunner made me think, “You know…with all the hills here, and kids to haul now…I can totally see myself on one of these.”

If you’re looking for an e-bike recommendation to get started, then skip the sketchy Amazon offerings and check out Rad right here. They’re the right balance between approachable (not cheap) prices, car-replacement levels of practicality, plus quality and design that you’ll actually like to ride. Inventory goes in the blink of an eye, however…especially since early 2020.