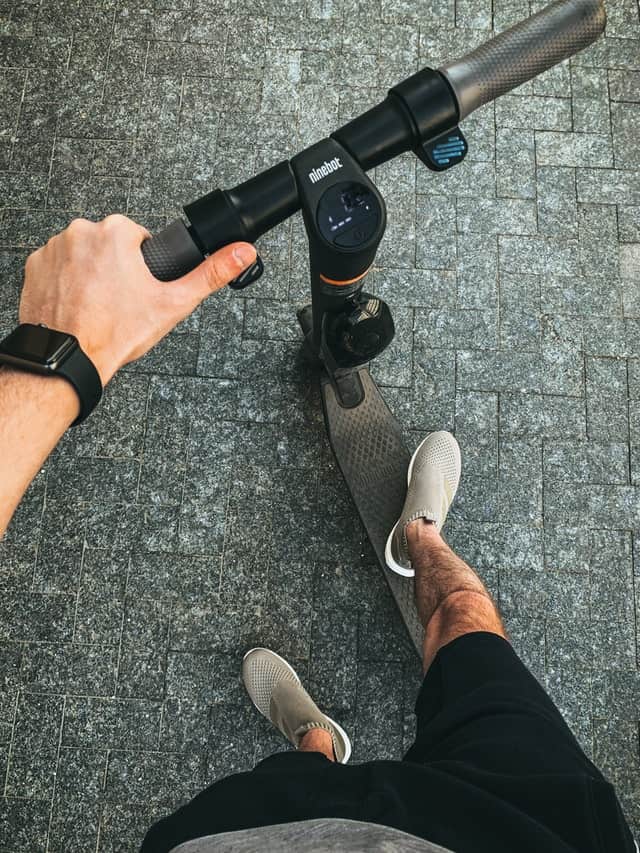 The first kind are issues of awareness. There’s a lot going on around you, in terms of both traffic and terrain. It’s just not easy to keep track.

The second kind are issues of the vehicle. Electric scooters have some quirks that you haven’t encountered on any other vehicle.

Below, we’ll look at what these involve, how they play out, and above all…

How you can avoid them for a safe, fun ride.

It’s easy to get lost in the moment as you’re cruising along.

Feeling the wind, taking in the scenery…until some debris or small obstacles catches you off guard.

That spells disaster for a small-wheeled vehicle.

The key is to find the right balance between focus on the path ahead and awareness of your general surroundings. It sounds easy—even obvious—but it’s surprisingly tricky to maintain throughout a ride.

If you find your mind wandering as you roll along, try mentally noting specific features and obstacles to pull your attention back.

Staying focused is a critical first step toward safe riding.

But around traffic? That’s only the first step.

We’d all like to think that others (primarily in cars) see us and respect our right-of-way by default.

To be sure, most do.

Odds are you are a conscientious driver, so it’s only natural to assume the same of others when you hop on an electric scooter.

The sad fact is some people won’t see you or won’t yield to you, period.

If you’ve ever cycled in the city, you’ll know exactly what I mean. Someone makes a last-minute turn across your path, or doesn’t check the crosswalk before making an unprotected left turn…

As a new electric scooter rider, the unfortunate reality is you need to assume this will happen.

It’s better to ask yourself “What would this person do if I were literally invisible?”…

And be pleasantly surprised when they don’t…

Than to assume you’ll always have a clear, respected path.

It’s sad to have to ride in that frame of mind, but firsthand experience tells me it’s necessary in most places without adequate infrastructure.

The more lights, the merrier

There’s no 100% guaranteed way to be seen, but extra lighting is extremely helpful.

It’s wise to supplement built-in lighting with bicycle lights. I recommend this Cygolite set, which should suffice up to about 20 mph on unlit routes.

Place the front one on your handlebars—duh—then clip the rear one onto your backpack, jacket, or helmet.

(Even if your scooter has a rear fender light, it’s too low for drivers to see reliably.)

Handling an electric scooter like a bicycle is a near-certain way to crash.

If you’ve never (or rarely) ridden an e-scooter before, you’ve probably still spent time on a bicycle or even a motorcycle.

Without any other frame of reference, it’s natural to assume a scooter will handle about the same.

That’s mostly because bumps feel larger. Consider some typical pebbles, sidewalk cracks, or even lower curbs. They’re no big deal on a bicycle, but they regularly send scooter riders flying.

What’s more, scooters have a far shorter wheelbase, which means your weight is close to the front wheel.

As a result, it’s even harder for the front wheel to roll over obstacles. And if or when the front wheel hangs up, you’ll get scarily closer to that over-the-bars feeling.

Of everything on the list, riding with one hand might be the most common yet overlooked mistakes that new riders make.

Want to wave at your friend, throw out a quick turn signal, or reach for something in your bag?

The narrow handlebars mean your remaining hand has poor leverage. If an obstacle pushes the front wheel to one side—and it doesn’t take much—then you’ll struggle to stay upright.

Additionally, with those small wheels, there’s not much gyroscopic force to help “hold” you upright when the going gets rough.

So, what should you do instead?

Naturally, anything non-urgent needs to wait until you stop.

Turn-signaling is a little trickier. My inelegant solution is…just don’t signal while moving.

You can use your position in the lane and the turn of your head to make it clearer. But—local laws notwithstanding—I prefer simply to turn when there’s a safe opening. If an invisible person could merge/turn right there, without needing anyone to go out of their way to yield, then I’d simply do it.

But unless you’re barely inching along, the risk of crashing while one-hand is too high.

(Your scooter may have built-in turn signals. They’re a nice idea, but don’t assume they’re always visible. Most are too low (like on the deck) or too small to see clearly, especially on a sunny day.)

If you have your own electric scooter, you can probably pick from at least three different power modes.

And it’s extremely tempting to start in the full-power mode. Who doesn’t want to get out there and enjoy the power at the fingertips?!

But hold your horses.

If you’re new to scooters in general, it’s critical to get comfortable with all their quirks and limitations before pushing the limits of speed or acceleration.

Even as an experienced rider who’s only new to that model, it’s still wise to start slow. Every scooter has its differences in handling, braking, and the like. Better to encounter those differences at lower speeds!

The ideal electric scooter riding stance is with your feet staggered. This helps you balance over unexpected bumps, shift weight for braking power, and grip solidly with your feet.

If you stood on the ground, and someone pushed you back, which leg would you use to catch yourself? That should be your back foot while riding, too.

But that’s counterintuitive to many newer riders.

Unless you’re coming from a skateboarding or snowboard background, you might instinctively squeeze your feet side-by-side for a straight-ahead stance.

And that’s a mistake.

Firstly, there’s not much real estate for two adjacent feet to occupy.

They’ll probably hang over either side, which is unstable to say the least!

You’ll also want to reposition your feet a bit during longer rides to avoid discomfort. That isn’t really possible when they’re already crammed next to each other.

Second, and more importantly, there’s the issue of braking.

Slamming on the brakes shifts your weight forward. It’s simple physics: the scooter slows down but your momentum wants to keep going.

To counteract that, it’s critical to squat down and shift your weight back.

In doing so, you add weight over the back wheel, which gives it more traction and therefore more braking power.

At the same time, putting your center of gravity down and backward lets you brake even harder without flipping over the handlebars.

All this requires a staggered stance!

In brief, extra awareness and caution go a long way. That’s especially true on a small-wheeled vehicle, and all the more so around traffic.

There’s no escaping the fact that electric scooters have some unique risks, which you can go here to read more about.

But a lot of those risks are tied to beginner mistakes that are easy to make…but not too hard to avoid.

And the key to avoiding those pitfalls is to know about them in advance, rather than learning the hard way.

It also helps to have a scooter that emphasizes stability and smoothness over max power. Not because it prevents mistakes or their consequences, but because it gives you a little more leeway and forgiveness as you’re getting comfortable on two (electric) wheels.

For my money, the Ninebot Max (full review here) does that better than anything at a reasonable price. I’ve also rounded up some excellent commuter scooters to help jump-start your search, in case you haven’t already purchased one.