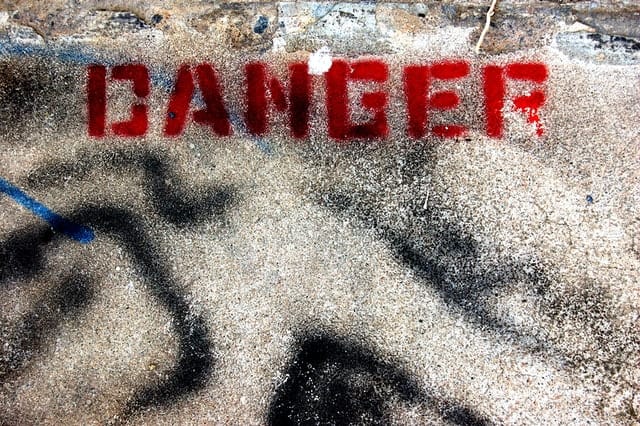 As electric scooter use exploded in 2018-2019, so did the number of injuries.

Was that merely because more people rode them in the first place? Or, perhaps, are they disproportionately dangerous compared to bikes or even cars?

Let’s see what we can reveal through some recent research and extensive personal riding experience.

Electric scooters are safe if ridden prudently. That requires awareness of their unique risks: small wheels, effortless acceleration, and often limited braking. They don’t handle rough terrain as safely as a bicycle. It’s also easy for electric scooter riders to endanger others by riding too quickly in crowds.

It’s tough to compare any alternative transportation—scooters, bicycles, even walking—to driving a car. The design, the speed, and the trips most people use them for are wildly different.

Some risk factors are much more obvious than others, so we’ll take a closer look at the main ones.

But first, what do the data say?

Electric scooter injury data: what we do & don’t know

Injury rates look are high on paper, which is indeed a public health and safety concern. However, the research omits some important context about who rides the scooters and how they ride.

They counted only injuries requiring emergency medical help, and calculated them per million vehicle miles traveled (VMT). That’s much more useful than injuries per trip, since scooter trips are much shorter than car trips, for instance.

(This may be the first study using reliable scooter VMT data, so it’s arguably the best study available as of writing.)

That’s worrisome—especially if you’re a city official in charge of scooter-sharing permits!

Putting the data in context

However, there’s an important caveat. Scooter-share data was no doubt the best available source, but it tells us less than you’d think about electric scooters in general.

And it’s not a matter of accuracy. The remote monitoring and app-based rental means data should be exactly right.

Rather, it’s that fundamentally different groups of people rent electric scooters versus own them.

For instance, owners often use their scooter to commute day in and day out. They’re simply a practical transportation choice, as covered here.

Conversely, scooter-share riders are often tourists, bar-hoppers, or joyriders who a) haven’t ridden one before and b) may not be in a state of mind to concentrate on safe riding.

There’s nothing wrong with any of that.

But common sense tells us that excited and perhaps slightly tipsy tourists, for instance, have a different risk profile from all scooter riders.

We just can’t extrapolate too much from the riskiest subset of riders on the most poorly maintained scooters.

(The authors make it clear that they studied only public rentals, but media coverage of this study tends to gloss over that important caveat.)

The risk to new riders has empirical support. The City of Austin’s own report found that 33% of injured riders they interview were hurt on their very first ride.

Scooters seem to have a high learning curve, with serious consequences for overly ambitious riding.

Does that make them dangerous? Yes, in a sense, but it also demonstrates the importance of personal prudence.

Speaking of which, the study only covered data from September-November 2018. That was fairly early in the e-scooter phenomenon.

I suspect later riders would be more aware of e-scooter risks before their first trip, so they’d ride more cautiously and reduce the overall injury rate. (Unfortunately, I’m not aware of a follow-up in Austin.)

What’s risky in the big picture?

It’s also important to take the relative risk of “175 to 200 times” with a grain of salt. These data apply to drivers/riders alone, but unlike scooters, cars frequently injure pedestrians and emit exhaust that causes further health issues.

Scooters do injury pedestrians too, but less frequently or severely. And they emit no exhaust. (I suppose they’re responsible for the exhaust of the vehicles that round them up to charge, but that’s all the more reason to distinguish between shared and personal scooters.)

So, throughout society, the harm attributable to cars comprises more than injuries to their drivers. The true relative risk of electric scooters is almost certainly lower that this study found.

Another important factor is that rental-scooter riders may be experiencing traffic outside a car for the very first time.

That’s a harrowing experience in most North American cities, where bicycle infrastructure is sorely lacking.

When we combine unfamiliarity with where/how to ride in traffic, plus fundamentally bad infrastructure, unfamiliar handling quirks, and easy mistakes to make…

It’s no wonder that injuries are high!

So, what’s the bottom line?

In brief, we just don’t have the data to say how dangerous electric scooters are, across the whole population of riders. Rental scooter data is a good start, and important for public policy, but I firmly believe it overstates the risk.

That said, scooters are not as capable or steady as bicycles (which are probably their closest alternative/substitute for transportation).

It is entirely possible to ride them safely.

But to do that, you’ll need to understand why they’re potentially dangerous in the first place.

Most electric scooters have 8″ wheels, and a few have 10″ or larger. Larger wheels make for a smoother rider, of course.

But both sizes are just a fraction of the 26″-29″ diameter on most bicycles.

For instance, my Ninebot Max had 10″ wheels that made it one of the most surefooted scooters around. But in comparison, even the 16″ wheels on my Brompton folding bike felt like monster truck tires!

The result? The same potholes and curbs you’d bike over without a second though can catch or deflect the scooter’s front wheel and potentially cause a nasty crash.

That’s not inevitable…but if you ride a scooter like you’d ride a bike, then it’s pretty likely.

Here’s a demonstration from Swifty, a kick and electric scooter brand in England, which shows what a difference wheel size makes.

Wheel size is the biggest risk factor for electric scooters as compared to bicycle. But braking performance is a close second.

What’s more, those entry-level brakes often have poor modulation. They tend to feel “on-off” rather than gradually firmer.

It’s nice to have a mechanical brake in the back, too. But the vast majority of your braking power comes from the front, so that’s what matters most for safety.

On a budget, your best (and only?) option for a front mechanical brake is the marvelous Ninebot Max.

Most higher-performance scooters use front and rear mechanical brakes to manage their higher speeds. That becomes common around $1,000 and above, on everything from relatively accessible Zero/Turbowheel/Vsett models to a cream-of-the-crop Dualtron.

It’s prudent to test your brakes with a brief, firm stop. Do this at the beginning of every ride, just in case of new mechanical or electrical problems.

Remember that brake cables slowly stretch over time. After all, they’re under constant tension even when you’re not pulling the lever.

If neglected, your brake levers will start to feel weak and mushy.

But prevention is as simple as tightening the cable on occasion. That’s done via a small nut or barrel adjuster near the brake lever and/or brake caliper. Check the manual for details for your specific model.

High speeds are easy and tempting

As with anything motorized, you can reach a high speed without fully realizing it.

Consequently, you may be taking on more risk than you’re aware of.

Even the 15 mph limit (give or take) on many rental scooters is plenty fast to cause problems…and injuries.

What’s more, electric motors have especially high torque, which makes for snappy acceleration. So not only are unintentionally high speeds possible, but some scooters will get you up to those speeds in no time.

As a rule of thumb, ride a few miles per hour slower than you think you need to. Admittedly, that’s less fun. But it’s far more fun than a crash you could’ve avoided with a little more restraint.

Proper maintenance is essential for safety, especially with tires and brakes.

If you have pneumatic (inflatable) tires, check their pressure at least weekly.

Avoid over- and under-inflation, both of which are dangerous. Excessively firm tires have poor traction and are easily jarred by small obstacles like pebbles. Excessively soft ones handle sluggishly, and could even detach from the rim if pressure is extremely low.

Despite the minor nuisance of monitoring air pressure, pneumatic tires are the safest and overall best choice for electric scooters. This article explains why.

Next time you hear a report of scooter injury data, remember that headlines lack context.

There’s a tendency to cherry-pick alarming stories and to present data (even if accurate) in the most dramatic way possible.

It’s more reasonable to say, “scooters are pretty safe if you’re careful.” But that wouldn’t get many clicks.

And even when we read thoughtful and balanced coverage of electric scooter injury data, keep in mind that rental-scooter studies reflect just one narrow slice of overall scooter use.

Like every mode of transportation, scooters have distinctive weaknesses and hazards.

But with a quality scooter, good maintenance, and safe riding habits, they’re far safer than the stories suggest.

I believe buying your own scooter is worth it for safety reasons alone, but you can read this article for some other considerations.

Most riders will be safest on something with modest acceleration, large tires, and great brakes. For me, the Ninebot Max was the perfect combination. Read my review here for the details.