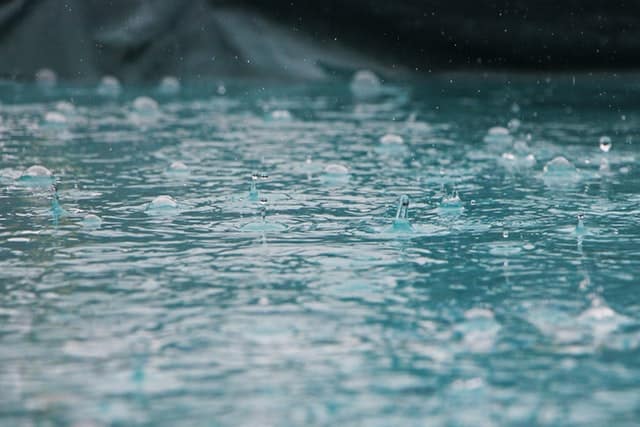 The water resistance of electric scooters is a little more complicated than you might think.

At the risk of sounding like an equivocating lawyer…”What do you mean by waterproof? Does it count if it’s just not not waterproof? And define ‘water’!”

In all seriousness, there’s some nuance worth understanding before you venture out into the wet.

Here’s how waterproof electric scooters are

Nearly all electric scooters are water-resistant for brief splashes (an IPX4 rating). Many can withstand light rain or occasional puddles (IPX5). Very few are rated for heavy rain or deep puddles (IPX6 or higher).

Some don’t have an official IP rating, so ask the manufacturer if in doubt.

How water can damage your scooter

The main concern is electrical damage. The battery and motors are vulnerable since they’re near road spray.

Some throttles (especially finger-trigger designs) are also susceptible to rainfall.

Wires need to pass in and out of all these bits, so getting a 100% seal is much harder than it might seem. In fact, it’s only possible up to a certain level of water pressure/immersion. There’s a rigorous and specific testing standard, as we’ll see in a second.

Another, unrelated issue is wet weather also means mud and grime galore. Those won’t break your scooter, but can cause premature wear (and look terrible!) if you don’t clean it thoroughly.

The International Protection (IP) rating is the standard measure of water resistance for electric scooters. You can find an overview here.

The last digit in the IP rating is the most important one. As I alluded to above, look for at least a 5 (as in IPX5) or ideally a 6 if you anticipate rainy rides.

This is where our pedantic definition of “water resistance” becomes important.

Are we talking just a sprinkle from straight above and nowhere else? How about a spray from a mostly upward angle? Or a splash from beneath? What about continual spray, like heavy rain, or even the jet-like spray of a big puddle?

Each of those corresponds to a different IP standard.

To make a long story short, a rating of IPX5 or especially IPX6 should give you general peace of mind about riding in normal rainy weather. I’d still think twice about a monsoon (for many reasons) but it’s up to your judgment at that point.

Can you ride a less water-resistant scooter in rain? Yes, possibly…but with a critical caveat. Surviving a rainy ride does not mean the scooter is actually waterproof. It may take a while for moisture to build up internally before it causes damage.

In other words, your officially non-water-resistant scooter might work fine in the rain at first, but that doesn’t mean you’ve found a loophole or the manufacturer was just playing it safe.

Water damage isn’t always immediate, so ignore IP ratings at your own risk.

Is it really a good idea to ride electric scooters in the rain?

Yes, it’s OK to ride in the rain if the IP rating is at least IPX5 (ideally IPX6) and it doesn’t void the warranty. However, the reduced traction and visibility mean you’ll need to take extra precautions to stay safe.

In other words, rain brings other problems besides water resistance.

Firstly, traction is obviously limited. This calls for gentler cornering and braking. Take special care around road paint and metal surfaces, too, as these can be extremely slick.

By the way, avoid riding solid tires on wet ground. They have far less traction than pneumatic (air-filled) tires even in good conditions.

And if you can’t avoid it, then travel much slower than usual. Half or two-thirds of your typical speed is a good, conservative rule of thumb for solid tires on wet pavement.

Traction is potentially an issue with the scooter’s deck, too. If there’s a lot of exposed metal or plastic, then cover those areas with skateboard grip tape.

Secondly, it’s hard to distinguish puddles from potholes. Many e-scooter, bicycle, and motorcycle riders have crashed because they rode into what they believed was an innocuous puddle…only to be proven wrong.

Finally, you’re less visible when car windows are distorted by raindrops, and all the more so after dark.

As of writing, the Boosted Rev has the highest water resistance rating (IPX7) of anything on the market. (Now that Boosted is gone and Lime has acquired their patents, availability is a whole other matter.)

However, the EMOVE Cruiser claims to be the “highest water resistant rated electric scooter in the world” despite its slightly lower IPX6 rating.

The Ninebot Max (IPX5) is less water-resistant on paper, but still popular in wet climates. (It’s the best value of the three, and arguably the best value period. I’d highly recommend it to almost anyone. Check the specs or read my hands-on review if you’re curious why.)

By all accounts I could find, these three do remarkably well in the wet. And, anecdotally, they’re all popular among fellow e-scooter riders in my rainy Pacific Northwest home.

There are several others worth considering, too, but the above are (relatively) time-tested, and the EMOVE and Ninebot aren’t too hard to find in most of the world, either.

(At this point, I should mention that riding in rain may void your warranty. Naturally, this varies between brands and models. Read the terms and conditions carefully before deciding whether to venture out.)