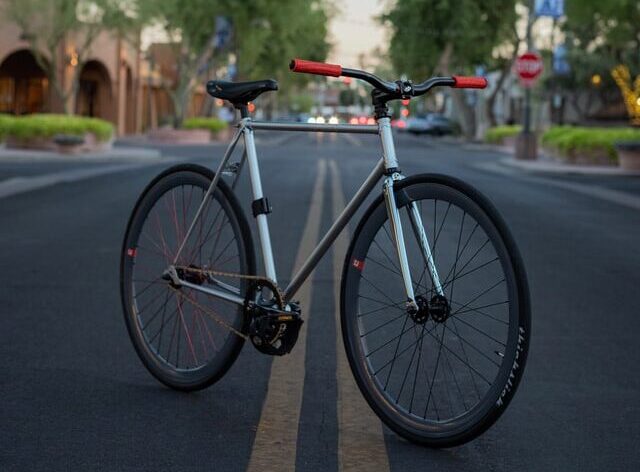 To some, they’re cycling in its purist form. To others, they’re silly hipster masochism.

But when the rubber meets the road, how difficult are they? And what’s the point?

Here’s whether fixie bikes are hard to ride

They’re hard to ride, especially if you’re used to bikes that can coast. The single gear makes climbing tougher, but fast descents are the hardest part of riding a fixie. Braking technique can also feel awkward.

However, handling is no harder than on other bikes, since the drivetrain does not affect steering.

If you stop pedaling on a fixie, the pedals keep on rotating, which can throw your feet off if they’re not attached. It’s extremely hard to place your feet again without stopping, so most fixed-gear riders prevent that by using toe clips or clipless pedals.

Those also increase power a bit, but simply keeping your feet in place is probably the biggest benefit.

(It’s worth clarifying that all fixed-gear bikes are single-speed, but not all single-speed bikes are fixed-gear. So, if you see a bike without a derailleur, it isn’t necessarily a fixie.)

With practice—ideally far from hills or cars—this all starts to feel natural.

The fact that you can’t coast is only a big problem if you instinctively ride as though you could. When reflexes and muscle memory change, the whole experience becomes more enjoyable.

It’s also a great workout, since climbs are laborious and there’s no way to coast on the descent.

Some enthusiasts liken it to driving a stick-shift car, since it forces you to be complete in tune with the ride.

Personally, I’m skeptical, since a manual transmission doesn’t stay in one gear and push back at you if you try to slow down…but I digress.

What about riding a fixie on gravel or off-road?

You certainly can ride a fixie on gravel or even mellow trails, but it’s not easy. You’ll need a lower gear to increase torque for climbs. The bumpiness makes clipless pedals or toe clips even more essential. One advantage is there’s no derailleur to fall victim to mud and grime!

However, a single-speed bike (with a freewheel) is usually a better choice.

It’s just reliable, practically as simple, and far easier to ride off-road. The ability to coast down steep sections is nice, but even more importantly, coasting helps you avoid catching a pedal on rocks, roots, etc.

What is the point of a fixie?

Initially, it was just the simplest way to build a bicycle. Today, fixies are used primarily for track (velodrome) racing. Bike messengers have also used them to minimize drivetrain maintenance and reduce the appeal to thieves. And some cyclists prefer their stripped-down look and experience.

The first bicycles in the early to mid-1800s used a direct, front-wheel drive—just like a children’s tricycle. There was no need for a chain or gears, but it was effectively a fixed gear.

The freewheel/freehub mechanism (that ratcheting thing that clicks as you coast along) was invented in the 1860s. That’s right about when bicycles took on their modern form of two equally-sizes wheels and a rear chain drive. But it wasn’t widely sold until of the century, and took many more years to become the norm.

Fixed gears remained popular for racing well into the 20th century, and are still the standard for track racing. There’s just no need to shift or even coast during a short race on a smooth, flat velodrome surface.

(I’ve always wondered why they didn’t gravitate toward single-speeds with a freewheel, instead. That’s just as reliable, but more practical around traffic. My best guess is that high-quality freewheels weren’t yet widely available in the 1990s, but drop me a line if you know the story!)

Anyhow, drivetrains have gotten more reliable in the last 20 or so years, and electric bikes have become common. Fixed gears no longer serve such a practical purpose for messengers

Why do hipsters ride fixies?

The urban hipster and messenger subcultures overlapped a lot, especially in the 1990s-2000s, so it’s no surprise that hipsters gravitated toward fixed-gear bicycles. For one thing, they’re easy and practically free to convert from vintage road bikes.

Perhaps, symbolically, they’re even a way to take part in the freedom, edginess, and adventure of the messenger life—without the dismal pay, unsteady work, and considerable danger of actually being a messenger.

However, keep in mind that not all hipsters ride fixies. Everything from geared vintage bikes to Euro-style city bikes are trendy in some circles.

What’s more, not all who ride fixies are hipster. The legendary Sheldon Brown (a well-known mechanic and prominent cycling author/blogger) was a huge fan of them, yet couldn’t have been farther from the skinny-jeans-and-indie-rock stereotype.

Why don’t fixies have brakes?

There’s never a rear brake because the rider can resist the pedals to slow down. Many fixed-gear riders actually do use a front brake. Some avoid them for aesthetic reasons or to keep cables from tangling during freestyle stunts. Tracking racing is the only case where front brakes are truly unnecessary (and often not permitted).

For the rear, the rider personally acts as the rear brake by resisting the pedals. The idea is to do that in conjunction with the front brake, just like you’d squeeze both brake levers simultaneously on any other bike.

But unless you’re actually racing in a velodrome, or doing low-speed stunts in a clear area, it’s a terrible idea to remove the front brake!

However, this raises an interesting legal point.

Most US states (and many countries) require all bicycles on the road to have a brake that can stop the bike within a certain distance on flat, dry pavement.

But they don’t specify what a “brake” is.

If rear-wheel fixie braking technique alone can bring you to a stop under whatever the law requires, is that effectively a brake?

The District of Columbia says yes, but as of writing, no other state gives a clear answer. It’s not exactly a hot topic in court, either, so I couldn’t find any precedent.

Still, for one’s own safety, a front brake makes sense on the street.

Clearly, fixed-gear bikes aren’t for everyone. The lack of coasting is the biggest challenge and risk. And it’s tougher to climb with just one gear, but that applies to fixed and free (coasting) single-speeds alike.

But they’re the one and only choice for track racers, and their simplicity has a certain appeal to casual cyclists.

And most importantly, they’re also a foolproof way to blend in if you find yourself transported to Brooklyn or San Francisco circa 2005.