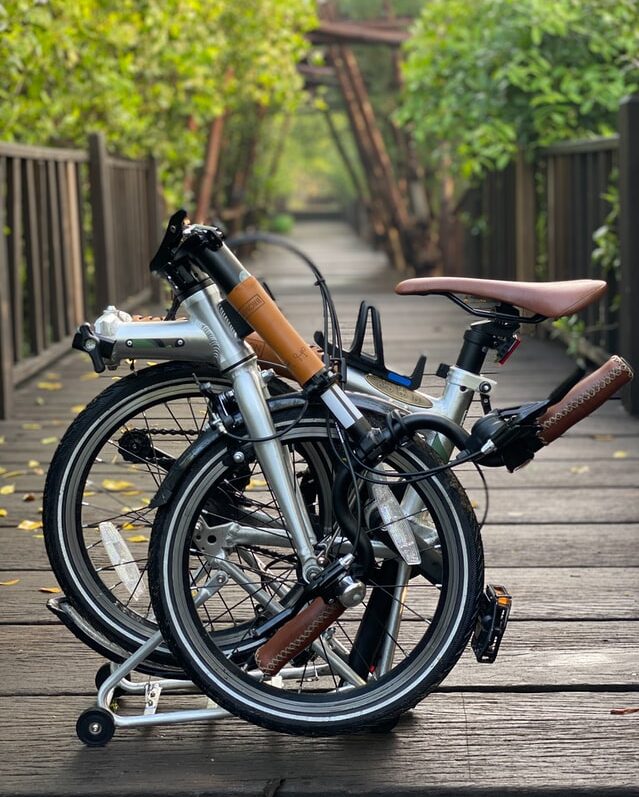 What makes folding bikes perfect for some folks makes them a pain for others.

Some downsides are obvious on paper, whereas others only emerge after you’ve lived with one for a while.

To help you understand what you might be getting into, below are the biggest disadvantages of folding bikes. This is based on my own experience with over a year of daily, all-weather commuting on a folding bike, as well as conversations and correspondence with fellow cyclists.

For similar components and build quality, a folding bicycle costs about $100-$300 more than a non-folding one. That’s mostly because a strong folding frame requires extra R&D and proprietary parts.

For example, the entry level for regular bikes worth owning is around $400 or $500. Here are some great budget examples that’ll give you an idea of what to expect.

But the entry level for worthwhile folding bikes is around $600-$700 and up.

Likewise, some regular bikes offer commute-friendly upgrades like dynamo lighting around the $800 mark (here are a couple). You’re looking at $1,500 or more for a comparably equipped folding bike.

Whether it’s worth the additional cost is another question altogether. If paying that premium lets you cycle when you otherwise couldn’t, then I’d say it’s a bargain.

2. A bumpier ride in general

The larger a wheel, the more easily it’ll cruise over bumps and dips. Folding bikes typically use either 16″ or 20″ wheels, compared to the 27.5″ or 29″ on most road, hybrid, and mountain bikes. Their wheels are around 2/3 the diameter, so obstacles feel about half again as large or abrupt.

This isn’t a problem on decently maintained streets. But if your roads are rougher, then you may find yourself wishing for nice, fat 50mm tires on standard 650b or 700c wheels.

Some brands use a suspension block (built into the frame) or a suspension seatpost to temper the bumps. However, potholes remain a problem, so take particular care to avoid them (as well as “puddles” that may prove to be water-filled potholes).

However, the flip side of the coin is more agility. It’s no fun rolling up/down curbs on 16″-20″ wheels, but it’s far easier to navigate the tight spaces of typical city riding.

As an aside, smaller wheels pose some related issues, especially for high-mileage use such as touring on a folding bike.

It’s very rare to find folding bikes with a front derailleur. That’s partly for technical reasons (it might complicate the fold) and partly because most commuters and city riders just don’t need a wide gear range.

But if long, steep climbs are on the horizon, then you’ll find yourself wishing for a “granny gear” up front.

Some brands address this by shifting the entire gear up or down, or by using extra-wide steps in between gears.

But with very few exceptions, you won’t find the combination of wide gear range and narrow steps that a regular bike affords.

Folding bikes have lower weight limits than non-folding bikes. Hinges concentrate forces on a few small points (rather than distributing them around a tube) so the result is more frame flex and a more conservative load limit.

But the flex can become noticeable if you’re hammering through a sprint.

And more importantly, some folding bikes are simply out of the question for heavier riders. It’s wise to confirm with the manufacturer, but you can start with this handy table I compiled for some popular models.

Then again, necessity is the mother of invention, and I’m continually amazed at the clever ways people fit large loads onto small bikes. (Just mind your warranty terms!)

There are also some compact and even folding cargo bikes; check out one of these electric models from Tern. They’re nowhere near as compact, but Tern is an exciting brand that’s continually exploring new ways to make bikes even more useful (here’s some more background on them).

Speaking of hinges, they also require a lot of extra metal for reinforcement and durability. That contributes weight, albeit just a couple of pounds.

Now, I firmly believe weight is almost irrelevant for commuters and casual riders—especially when the difference is so small.

But if you do prioritize weight reduction, then keep in mind that it’s difficult (and expensive!) to get a folding bike under the low-20-lb range.

The most comfortable bicycle handlebars are ones that sweep back toward the rider. That keeps your wrists in a neutral position and makes it easier to sit upright.

Unfortunately, their shape isn’t conducive to folding. That’s why most folding bikes use basically straight bars, which sweep back no more than a few degree.

For example, if the folded Brompton below had swept-back handlebars, they’d protrude several inches and ruin its easy storage.

Still, many folks find them perfectly comfortable—especially for the shorter trips we tend to take on folding bikes.

Bottom line: if you find the posture of a typical hybrid bike comfortable, then you’ll feel right at home on most folding bikes, too.

If you don’t, then you may have some ergonomic problems.

8. They just don’t look as cool

There, I said it.

Even as a delighted owner and daily user of a folding bike, I readily admit they have a certain…visual awkwardness.

It’s not about the bike per se; it’s about its proportionality to the rider. The bigger the rider, the more incongruous the look.

Is that a real problem? Does it affect their utility or value? Should it actually influence whether you buy one?

You won’t win style points, but those worries tend to slip away when you’re cruising freely in the fresh air on your own schedule.

For all their benefits, folding bikes do have disadvantages ranging from the trivial (style) to the significant (cost and ruggedness).

They’re not for everyone.

For instance, there are two common scenarios where folding bikes are the default choice, but not the only and perhaps not even the best.

If you need just a little more wheel clearance for tight quarters, but not full-on folding, then consider a mini velo. They’re easy to manipulate, and they minimize or avoid most of the drawbacks above.

If you need something extremely compact for super-quick trips (we’re talking 1-2 miles at most), then an adult kick scooter may be the ticket. They obviously can’t do much or carry much, but they’re quite a bit faster than walking.

Finally, if you want to get around faster, at a reasonable price, then an electric scooter may be a good compromise. They’re generally less portable, but also less sweaty.