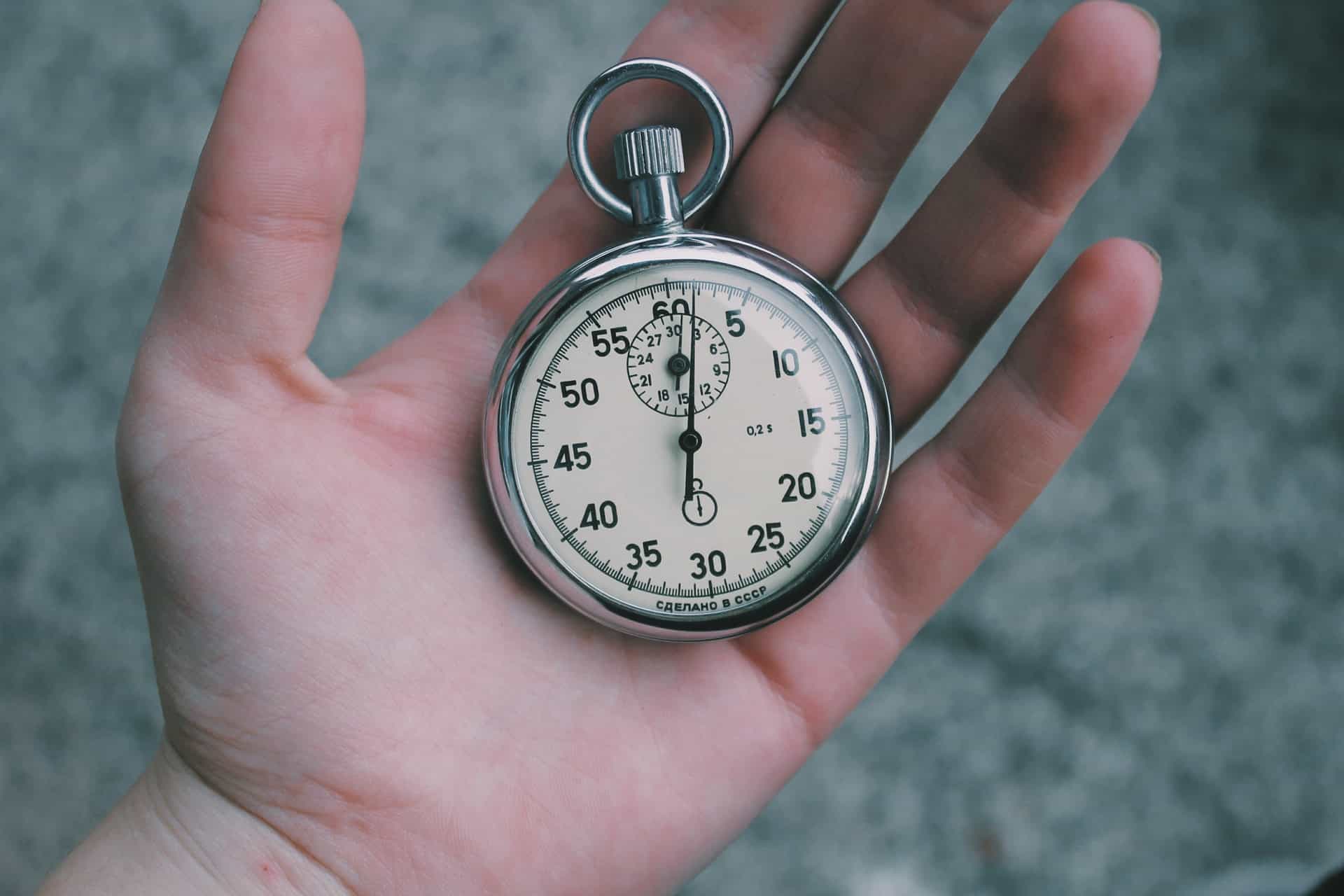 Getting on a bike, with the wind in your air and fresh air in your face, always beats starting your day with gridlock.

But when you’re tight on time, it’s not so obvious whether the practical benefits of bike commuting are actually worth it.

And time is one of the most common concerns. As a busy person with a clock to punch, how long should can you realistically expect to spend riding to work?

On flat, urban routes with frequent intersections, a bike commute takes about 8 minutes/mile (or 7.5 mph), so roughly 35 minutes of cycling for a 5-mile trip. On uninterrupted bike paths, your average speed may be 4.5 minutes/mile (13 mph) or higher due to less time stopped, accelerating, and decelerating. That’s just over 20 minutes for the same 5-mile commute.

Of course, your exertion is a huge variable. Add time for bicycle storage and clothing changes, if applicable, but remember cycling also replaces exercise that would require dedicated time.

All the above assume a moderate, comfortable pace that feels like a brisk walk. Your fitness level and preferred effort are huge factors, as is the hilliness of the terrain, so your own bike commuting time may vary quite a bit.

Let’s take a closer look at what determines your real-world riding time.

You know those guys who floor the gas in their overly loud cars to beat you to the next red light? Well, cycling fast in the city is equally futile.

The typical Dutch cyclist rides at just under 8 mph, but we’ll push that quite a bit higher, to 12 mph, since we in North America have sparser cycle traffic and generally sportier bicycles.

At a steady 12 mph, each mile would take you 5 minutes.

But in real life, you don’t actually go a steady 12 mph.

Cities usually build blocks as rectangles, so north-south blocks are twice as long as east-west ones, or vice-versa. You’ll encounter a mix of both, so I concur with this Quora answer that 400′ is a reasonable average.

That means just over 13 blocks per mile, and let’s assume that you hit just 1 in 6 is a red light. Very optimistically, that’s 2 red light per mile. (You’ll often experience red lights as basically all or none, but again, we’re talking averages.)

At 2 red lights/mile * 1 min/red light, we have to add 2 minutes of waiting time to the 6 minutes of riding time. That yields an effective speed of 8 minutes/mile (or 7.5 mph) average riding speed in an urban downtown.

(In real life, there’s some time spent speeding up and slowing down around each stop, but we won’t even bother estimating that.)

Of course, you can reduce that time by sprint to catch a string of green lights, but even at a strenuous 16-17 mph pace between stops, your effective speed is just under 6 minutes/mile (or 10 mph). That’s much more effort for an only slightly quicker door-to-door trip.

A fundamental problem with cars is that they require an enormous amount of space to move very few people. Just a couple dozen cars–with fewer people than half a city bus or train car–can chug up entire city blocks!

If your locale has bike lanes, then two wheels mean a free ticket out of traffic purgatory. In reality, cars don’t always respect the bike lanes, so it’s worth extra caution in any lane without a solid physical barrier. But on the whole, as cars get stuck bumper to bumper, cyclists can comfortably clip along at 10-12 mph or even faster.

When bike lanes don’t exist, it’s common practice to simply weave between cars, but you’ll have to decide for yourself about the prudence (and legality) of doing so.

Your bike and fitness matter more outside the city

As you get farther from busy downtowns, intersections tend to become fewer and farther between. Many of us even enjoy a blessedly car-free riverbank trail or greenbelt path with nary an interruption for miles.

In those cases, you’re not losing time accelerating and decelerating near intersections, let alone stopped at the intersections. Thus your fitness plays a much larger role.

As mentioned earlier, a healthy but non-athletic person should have little trouble maintaining 12-13 mph on an open stretch. A fairly fit cyclist in a somewhat aerodynamic position can sustain half again that speed without too much trouble.

For a brief, 3-mile commute, the difference in travel time isn’t pronounced. We’re talking 15 minutes at 12 mph versus 10 minutes at 18 mph. That’s a large percentage, but saving 5 minutes twice a day is hardly worth buying a racing bike and cycling tights to achieve.

But there’s a small and dedicated set of bike commuters who ride quite a bit farther, as in 10 miles each way, and much more in rare cases.

At that point, the difference between a 12 mph jaunt and an 18 mph training ride starts adding up: the same 10-mile commute takes 50 minutes versus 33.

Now, at 17 minutes twice a day, or 34 minutes a day in total, you can make a good case for turning your commute into something of a training ride assuming the route is conducive to speed.

Hills matter, but it cuts both ways

“Well,” you might be thinking, “there’s no way I’m maintaining 12 mph or whatever going up that huge hill on my route!”

And fair enough. A prolonged climb may cut your speed by roughly 50%, although it obviously depends on the steepness of the hill and on how hard you care to work.

But it can also increase your speed by 50%-100% on the way down. Even without pedaling like a maniac descending the Col de la Loze, you’ll have no problem cruising gravity-assisted at 20 mph or much, much more.

That’s why a hill will totally change your commute time in one direction, but won’t particularly affect it over a round trip. It’s a similar story with headwinds and tailwinds, too.

Many of us are fortunate enough to work somewhere with reasonable bike racks: you know, the sort that are consistently available and are close to a door people actually use.

In those cases, locking up your bike and removing your pannier takes adds just minute or two–if even that.

But others aren’t so lucky. If you need to traipse around a large building or office park just to find a spot to lock up, then it can turn into a 10- or 15-minute task.

That leaves two alternatives. One is to take it as a given and lump it in with your overall commuting time. The other is to switch to a folding bike and store inside your workplace, even under your desk, to avoid a parking-and-locking hassle. (If that’s of interest, then a Brompton is the most refined option around. Check out this review if you’re curious.)

And once inside, you may need to freshen up to be presentable.

I always emphasize casual clothing, like the biking jeans or casual alternatives covered here, even in the rain.

Assuming you haven’t worked up a major sweat, then you’re ready for the day with no more than a quick baby wipe, a bit of deodorant, and perhaps tidying up your hair. That’s barely a 5-minute process, which is why I advocate a relaxed bike-commuting pace on a comfortably upright bike!

But what if you have an extremely long commute that makes serious sweat inevitable? Or you want to approach your commute as more of a training ride?

You’ll probably need in the range of 15 to 30 minutes to shower (if available) or otherwise wash up, change clothes, bundle up laundry, and so forth. There’s absolutely nothing wrong with that, but keep in mind that it may undermine the quicker riding time of a fast commute.

However long your bike commute takes, it’s probably longer than a comparable car commute. There are exceptions, like in Manhattan at rush hour, but it’s generally slower not to have an engine.

But here’s the cool part. The flip side of not having an engine is that your transportation is also your cardio for the day, or at least a good portion of it.

Perhaps you can drive in 15 minutes what takes 45 minutes to cycle, but you’d still (ideally) need to carve out other time for exercise. So even if this hypothetical commute takes 30 minutes longer, it’s actually 45 minutes of moderate cardio you don’t need to budget your limited time for.

As we’ve seen, bike commutes take very roughly 8 minutes per mile in denser cities and 4.5 minutes per mile on more uninterrupted routes. Those numbers vary greatly depending on how hard you like to ride and whether you’re going up or down significant hills.

Storing a bike at your workplace is often quick, but for some folks, it’s cumbersome enough to make a difference in your overall commute time. (If so, then a folding bike may be worth considering.)

You’ll probably need at least a couple minutes to freshen up after arriving, too, so remember to factor that into your door-to-door time.

But however long your real-life bike commute takes, it’s almost always worth it to build sustainable exercise into your day.