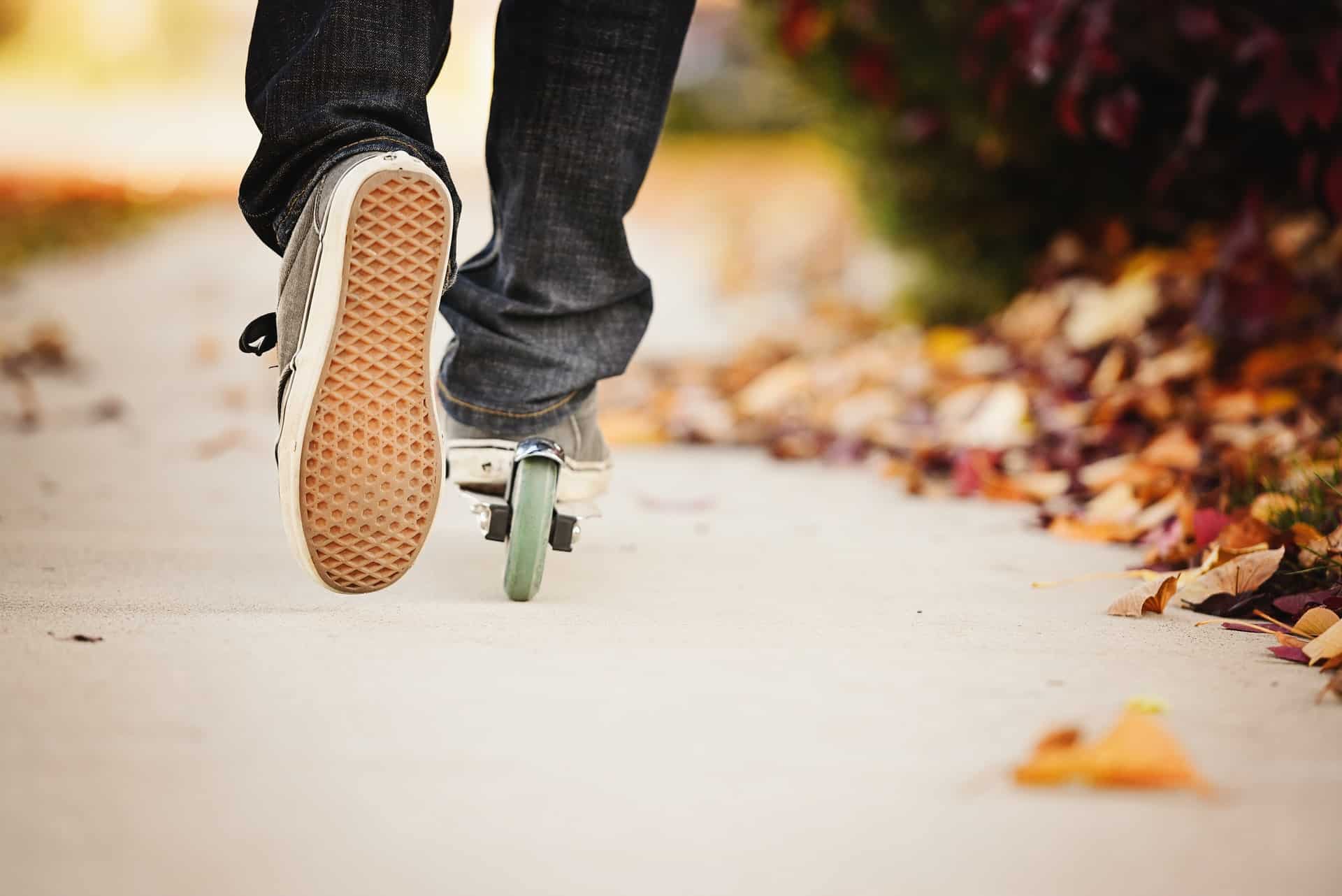 If walking is too slow for your commute, but a bicycle is overkill, then kick scooters might seem like a viable option.

There are some distinctive advantages at limitations that are unique from any other mode of transportation, so this will be a closer at what you need know.

Here’s when kick scooters are good for commuting

Kick scooters are good for short commutes (2-3 miles at most) with smooth, flat terrain and generally dry weather. Their small size and light weight are convenient for storage, public transit, and quick trips like mid-day lunch runs. However, they are a poor choice for long, rough, hilly, or all-weather commutes. Larger riders may have trouble finding models that fit.

I’ve covered other common kick-scooter questions before, but commuting is such a common use (for adult riders) that it deserves a more nuanced look.

Adult kick scooters are simple devices for simple tasks. Fortunately, that makes it easy to figure out when they do and don’t make sense for most commuters.

Here’s a rundown of their most helpful features for getting to/from everyday destinations like work, shopping, or school.

If you need to dash on and off of public transportation, or if storage space is limited, then a small and light scooter is infinitely easier than a bicycle.

(To be fair, folding bicycles like a Brompton work great, but are heavier and far more expensive.)

Many weigh less than 10 pounds. Most fold to less than 3 feet long by 1 foot wide and deep.

That means no need to lock up at a bike rack, and no bothering fellow passengers on transit.

The only catch? Unless you opt for a bigger, heavier model, there’s generally a 220-lb weight limit for the rider and clothing/gear.

You could spend at least a few hundred dollars on a high-end adult kick scooter, but that’s not necessary.

For the cost of a few dozen bus or train trips in most large cities, you can have more time back, more fun in your commute, and perhaps both.

Many of those trips would be easy, healthful, and practically free on a scooter. Accounting for city gridlock and parking, the travel time may even be similar.

That’s not to suggest a scooter for buying lumber or taking the kids to soccer practice, obviously.

But for relaxed trips without a load, it’s hard to think of a better deal.

A spritely pace takes less effort than you might think.

(That’s assuming your route is smooth and flat, but we’ll get back to that in a minute.)

With modest effort, you can expect twice the speed of a brisk walk. And with a little more oomph, you can scoot along significantly faster still.

But for city or neighborhood trips with plenty of tight corners and stop-and-go, that’s just the ticket.

They build fun, gentle exercise into your routine

I don’t know about you, but I’ve never suffered from too much movement.

It’s usually quite the opposite.

That’s why building productive movement into your day is one of the easiest ways to keep fit despite a sedentary job.

Walking is always an option, but sometimes it’s too slow to be practical.

But rather than grabbing the car keys for a short commute or last mile to transit, consider hopping on a scooter instead.

3 Problems With Commuting On Kick Scooters

This site is all about getting around in fun, healthful, and highly practical ways.

And despite all their merits, scooters aren’t always the right means to that end.

In my experience, here are the situations where you should consider other modes of (human-powered) transportation.

Ever rollerblade across sidewalk cracks or in the rain?

“No,” you’re thinking. “That would be a terrible idea.”

The same goes for most kick scooters (with a few exceptions that I’ll mention below).

Just like inline skates, most of them have thin and rock-hard wheels. Even at 8″ or 10″ in diameter, they’re jarring–at best–on bumps and debris.

Traction on wet pavement is basically non-existent, and you can pretty much forget about braking quickly.

As much as I enjoy kicking around town, our wet Pacific Northwest streets just aren’t conducive to year-round scooter use.

Trying to kick-scoot up a significant hill is a humbling experience.

You wouldn’t think bicycles are that much more efficient. After all, they’re still human-powered.

Yet an incline that feels modest on a bicycle will have you huffing and puffing–or probably just walking–on a scooter.

Besides, their typically weak brakes can make for a scary descent.

The same goes for strong headwinds, long distances, and whatnot. They simply wear you out in much less time.

On the plus side, those are all great workouts on a kick scooter, and that’s something we could all use more of.

But what if you’re in a hurry, or have extended hills, or want to avoid breaking a swear?

Unfortunately, a kick scooter probably isn’t the right choice. (But a bicycle or electric scooter may work perfectly.)

Decent city bikes have all sorts of rack and bag mounting options. And if those don’t suffice, you can always opt for a dedicated cargo bike, too.

But on a kick scooter, you’re essentially relegated to a backpack.

That’s fine for light loads: think MacBook, travel mug, and fresh shirt. But it gets increasingly uncomfortable as your commuting cargo grows. For some folks (like yours truly), sweat is a major issue with backpacks as well!

Small handlebar-mounted bags may also work. However, small-wheeled scooters lack the smoothness and stability of a bicycle. If a handlebar bag is heavy prone to swinging around, it can cause dangerous and unpredictable handling.

If a backpack will suffice, though, then consider one made for running.

They fit more snugly and breathe better than your old Jansport, often with good water resistance and highly visible reflective bits to boot.

Lululemon’s More Miles Active Backpack (available here on their site) is a stylish example that I particularly like, but several outdoors brands make inexpensive options, too.

If you like the idea of a kick scooter commute, then it’s important to pick the right one to start with.

It’s hard to go wrong with any model with 8″ wheels or larger. That said, opt for a brand name where possible, if only so that replacement parts will be easier to find.

Here are some suggestions.

Razor is probably the first brand that comes to mind when you hear the phrase “kick scooter.”

As a kid, I spent many an afternoon cruising the neighborhood. Much more recently, I picked up one of their 8″-wheel adult models.

It’s a cheap but decently made scooter that is heaps of fun on good pavement–and surprisingly fast, too.

Build quality is nothing to write home about, but there were no problems at all, either. Just keep in mind that anyone over 220 lbs and/or roughly 5’10” will need a bigger, sturdier model.

My full review is here, if you’re curious. Similar but slightly upgraded options are the A5 DLX, A5 Prime, and 10″-wheeled A6.

A handful of models will support riders in the range of 250-300 lbs.

But for absolute strength, I believe nothing beats the Xootr Mg, with an astonishing rider weight limit of “over 800 lbs” according to the manufacturer.

The deck measures 23.4″ x 7.5″, ample room for any shoe size. That’s significant since Razor decks can get a little cramped.

Xootr says the handlebars fit riders up to 6’7″, although if you’re that tall, then something more like a foot bike will be more comfortable. See my last pick, below, for a suggestion.

Everything I’ve seen indicates top-notch build quality and customer support, too, so it’s a worthy upgrade for riders of any size.

The only possible catch is that its wheels are even harder than urethane ones. That translates to more speed in ideal circumstances, but more vibration and instability elsewhere.

They take the edge off bumps and may offer better wet-surface traction than urethane wheels (although fender brakes don’t work well on wet pneumatic tires, either).

If your commute route is a little too jarring, then the Micro Flex Air’s pneumatic tires and shock-absorbing deck will smooth it out nicely. Its flexible, longboard-like deck also minimizes jolts, although some larger riders find it a little too flexible.

What’s more, Micro is an established brand and easy for North American commuters to find online.

The only catch is that it rolls more slowly than a urethane-tire model. You can remedy this with a much larger wheel diameter (see below), but that would undermine the convenience that comes with roughly 8″ wheels.

Best for all conditions: Anything from Swifty (see the full line)

Finally, let’s move on from standard commuter scooters and into foot bike territory.

Like the name suggests, they usually have bicycle-style wheels, handlebars, brakes, and so forth. This raises the price significantly, but also the speed and capability.

Swifty makes some of the most thoughtful and (relatively) stylish ones on the market.

There’s no denying that the high base and shipping are a barrier for some. But if your ideal commuter scooter needs to handle rough roads in all weather, and be fun for extended weekend rides, then there’s no better option.

Check out my hands-on Swifty review for a closer look.

Bottom Line: When Kick Scooters Are & Aren’t Good For Commuting

Adult kick scooters are one of the funnest, simplest, and cheapest ways to get from A to B.

If your trips involve good surfaces in mild conditions, then it’s hard to go wrong. And at such modest entry-level prices, there’s very little at stake anyhow.

However, consider other transportation (especially a bicycle) for more demanding routes or weather.

If you want an inexpensive starting point, then the Razor A5 Lux is hard to beat. It’s not perfect, but it’s a bargain. Have a look at my extended review here, or at this complete guide to adult Razor models.