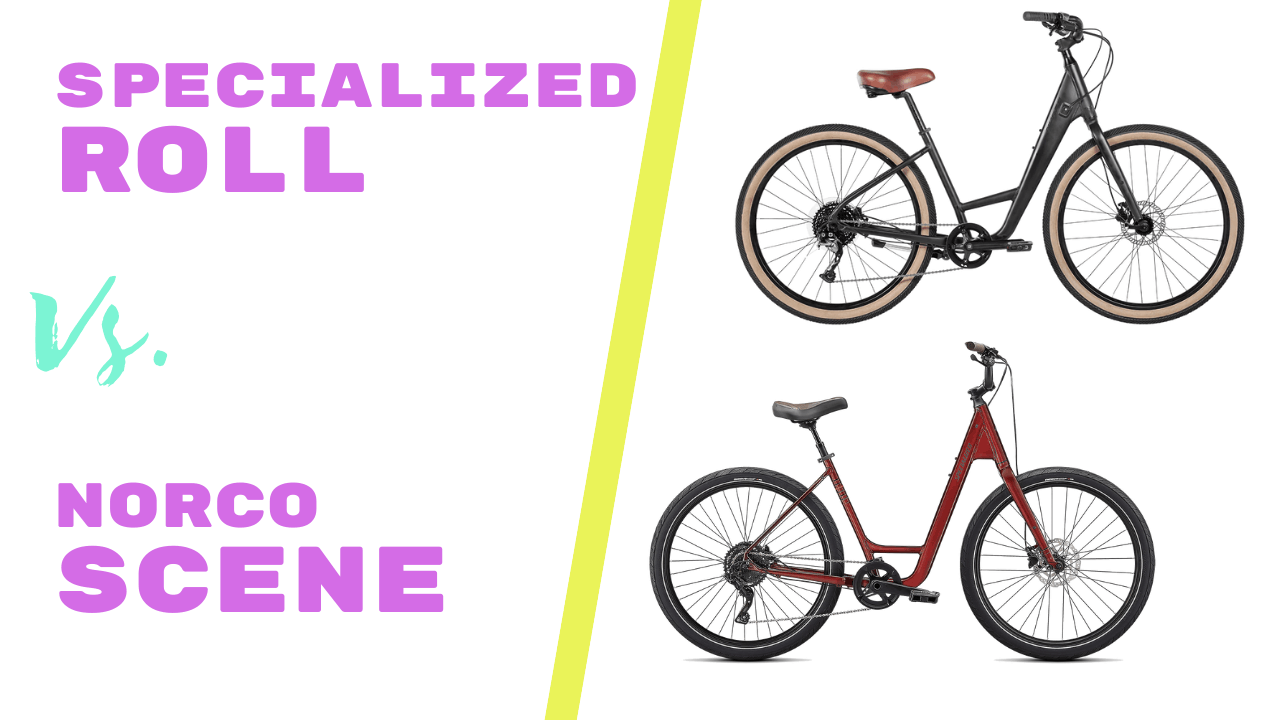 The Norco Scene and Specialized Roll lines are two of the cleverest, most practical, and most needed bikes to hit the market in ages.

That sounds like hyperbole since they’re basically billed as comfort bikes.

But I mean it.

They put the comfort, smoothness, and practicality of a traditional Euro city bike into a lighter, more affordable package that fits the North American market.

They’re the sort of bikes that long-time cyclists (yours truly) can appreciate, yet others can hop on for the first time in decades and say, “Hey! This is way smoother and more fun than I remember!”

All at a reasonable price point, to boot. Not cheap, but reasonable.

Anyway, I’ve gushed enough. Let’s get to what you came for.

The Norco Scene and Specialized Roll ride similarly and are both excellent for urban, commuting, and recreational use. They’re smoother and more relaxed than a hybrid, but livelier and faster than a cruiser. This strikes a perfect balance for all-around, relaxed cycling.

The Scene and Roll are also great for gentle gravel or dirt riding, too. Look elsewhere for rugged terrain or steep, off-road climbs.

Having ridden both models and even owned a Scene (among dozens of other bikes), here’s my firsthand take on how they compare and which, if either, might work for you.

Below are the key specs according to each manufacturer’s websites.

Note that the 2020-2021 bike boom has greatly disrupted supply chains, so don’t be surprised if specs change even within the same model year.

Which is the better bike?

Of all three Roll and four Scene models, the Scene 1 is the best value. It’s not cheap at $899, but its drivetrain and brakes are significant upgrades from the cheaper Rolls and Scenes, and on par with the more expensive Roll Elite.

As a matter of personal taste, I strongly prefer the Scene’s more swept-back handlebars.

I find them more comfortable than the less-swept bars on the Roll—without sacrificing anything in control or stability, even on trails..

All in all, they ride so similarly that the choice comes down to value—and availability.

The Scene has better drivetrains and brakes for the money

Each Scene variation gives a little better bang for the buck than the most comparably-priced Roll.

* To be frank, I’ve never been impressed by Tektro mechanical discs. They require more adjustment and wear-in before they’ll stop as effectively as good v-brakes. The difference is that they’ll stop just as well in the rain, whereas v-brakes suffer a bit. Read this guide to brakes to learn more.

It makes senes to compare the Roll vs. Scene 1, Roll Sport vs. Scene 2, and Roll Elite vs. Scene 1

The Scene IGH N8 is a slightly different matter, speaking of which…

Remember, these are based on MSRPs. You might find better prices on sale or secondhand bikes, which changes the equation.

(Timing is everything, so read this guide to when to buy before you pull out the credit card.)

Only the Scene offers an IGH (hub gears)

Internally-geared hubs (IGHs) are great if you don’t mind paying more to minimize daily maintenance. And only the Norco Scene offers an IGH option.

Its Shimano Nexus 8 is a rock-solid model that I’ve enjoyed on other bikes, and would not hesitate to recommend. The gear range is comparable to a 3×8, 24-speed drivetrain, just with fewer and therefore wider steps between gears. It’s ample range for urban riding. And since you’re not a racer trying to maintain an exact pedaling cadence, the fewer-but-wider gears aren’t a problem.

Generally, this is the way to go if you anticipate harsh winter weather.

IGHs do have their disadvantages, though. Check out this guide if you’re not sure what makes sense for you.

Both bikes suit riders from around 5’1″ to well over 6′. Size charts are below.

Remember, these are just approximate. Your preferences and riding style may indicate a different size.

And with stem, seatpost, and/or handlebar changes, it’s usually no problem to accommodate another 1-2″ shorter or taller.

If you strongly a prefer a diamond frame, then there’s only one option.

Additionally, the biggest (XL) Roll is sold only as a diamond frame. Its stack and reach are just 10 mm greater than on the biggest (XL) Scene. Unless you’re about 6’3″ or taller, either bike should fit just fine.

Incidentally, props to both companies for bucking the trend of calling the step-through design a “women’s” bike.

Women and men alike may have cargo or a child on the back, hip issues that prevent swinging a leg over, or any number of other reasons to prefer a step-through design.

For transportation and recreation, a step-through frame has only advantages. Diamond frames add necessary stiffness for hammering down during a race, plowing through roots and boulders, or carrying hundreds of pounds—none of which you’ll do on these bikes.

What the Norco Scene & Specialized Roll have in common

Besides the three major differences described above, these two lines are far more similar than not. The others difference in the specs table (up top) are trivial. Ride quality is remarkably similar between the two bikes.

Both have comfortable, upright posture

I’m a huge advocate of upright bikes. If you’re not training to race, then don’t cram yourself into the neck-straining, stretchy-clothes-requiring posture of a racing bike!

Sure, it’s slower to be upright, but you’ll enjoy the ride vastly more. Besides, stoplights and other factors have an even larger impact on how long it takes to ride in the city.

Both have fat tires that gobble up bumps

The Roll and Scene lines use tires in the ballpark of 2.25″ wide.

(OK, they differ slightly, but so do manufacturers’ measurements.)

For urban use, that’s the sweet-spot.

That’s 1/2″-1″ wider than most hybrids, so you’ll get terrific absorption of pavement irregularities, gravel, and even small roots. And width brings surface area, and therefore better grip on wet or gritty ground.

Yet they’re not fat enough to feel sluggish or sloppy—assuming proper pressure, of course.

What’s more, these extra-wide tires on 27.5″/650b rims gives similar outer diameter to narrow tires on 29″/700c rims. Or, in plain English, “fast and smooth-rolling but not awkwardly large.”

Both are easy to equip with racks and fenders

The Roll and Scene both have ample front and rear eyelets to add your own rack and fenders.

Those accessories are the only true essentials for practical cycling.

They’re such an integral part of a useful bike that I’d hesitate even to call them “accessories.” But I digress.

Anyway, it’d be nice if Norco and Specialized included them stock. But providing mounting eyelets is the next best thing, so at least you’re covered.

Some notes on fender sizing

From experience, you’ll probably get the best fit with 65-mm fenders on either bike. I’ve used these ones from SKS on my Scene and similar bikes.

All Scene and Rolls tires measure 50-something mm, so the 65 mm fender width leaves clearance for mud and debris while avoiding frame clearance issues.

Perfect fender fit can be elusive, especially with, so check with the fender manufacturer and/or your Norco/Specialized dealer to avoid hassles.

Specialized sells Roll-specific fenders, but I’d opt for universal ones (like the SKS set linked above). Normally, model-specific fenders are easier to mount. But a little online digging turned up several common complaints about this particular set: missing hardware, extra drilling required, and overall poor quality.

Bottom line: who should buy a Scene or Roll?

Although Norco Scene a slightly better deal than the Specialized Roll (at each price point), they’re both terrific bicycles for all-around use.

In brief, you can’t go wrong with either. If you’re under 6’3″, and can find a Scene at your price point, then you’ll love it. Otherwise—or if you have a strong aesthetic preference for a diamond frame—then you’ll love the Roll just as much.

From another angle both, both are suitable if:

Broadly, the Scene and Roll are optimal for the entire non-competitive and non-daredevil side of cycling.

For things like getting to work, buying groceries, exploring mellow paths and trails, pulling the kids’ trailer, or simply cruising in the sunshine.

“Perfect” is a bold claim, but for those purposes and at these prices, I’m tempted to make it here.