You can go a surprising distance on a single kick as long as the ground is smooth.

Unfortunately, that’s not reality for most of us. We have gravel and sidewalk cracks and all sorts of little things that threaten to derail a hard-tired scooter.

And even when there’s no direct hazard, all the vibration and rattling get old quickly.

Still, the basic A5/A6 design is a good one. It’s a fun and cheap companion for trips around town.

Razor released the A5 Air to offer that same convenience with a smoother and more relaxing ride. They began with the basic A5 frame, then swapped in pneumatic (air-filled) tires and some strategic plastic guards that minimize rattling.

In short, the Razor A5 Air is a great value and rides nicely on rough routes and/or wet surfaces. It is slightly heavier than its siblings, but remains portable. However, its low deck height and the inefficiency of inflatable tires may be frustrating, and its fender is too short to block spraying water. Braking is also poor, but no worse than on any other kick scooter with a fender brake. 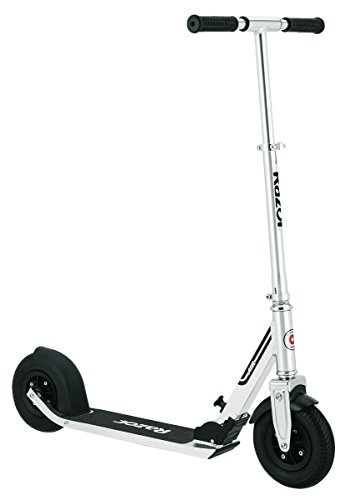 The A5 Air is the smoothest, most surefooted scooter in the Razor line. That's at the cost of some weight and speed, but it remains a terrific choice on rougher ground.

Check Latest Price
As a member of programs including Amazon Associates, we may earn a commission if you click this link and make a purchase.

If you’re in a hurry, click here to check the price on Amazon, but I recommend reading through to the end, first. I’ll elaborate on the drawbacks I mentioned above, since they’re not obvious until you’ve actually spent some time with it.

Below are my full thoughts after quite a few miles on sidewalks, neighborhood streets, and multi-use paths.

What The A5 Air Gets Right

The air tires make for a smooth, comfortable ride

I mentioned in the intro that urethane wheels make you nervous on less-than-ideal surfaces.

But this is a different story. I have no problem cruising over sidewalk cracks (those inch-wide ones that would trap urethane wheels), rolling through sandy stretches, and traversing debris without much worry.

The pneumatic tires also eliminate a lot of vibration on their own.

But perhaps the biggest benefit is how confidently you can roll over wet surfaces. In my neck of the woods, it rains often and we often have slick leaves on the ground. Normally I’d just walk, but the pneumatic tires handle them rather well.

It was actually smooth enough to take these pictures while rolling along.

Rattling and vibration are minimal

With small tires like any kick scooter has, you’ll always feel the ground a bit more than on a bicycle. Small wheels don’t roll as smoothly as big wheels, no matter what they’re made of. That’s just physics.

Still, the difference in vibration between urethane and pneumatic rubber tires is impressive.

On top of that, the A5 Air adds some plastic inserts in the handlebars and hinge.

One of my gripes about the A5 Lux was its terrible, loud, tooth-rattling, vibration. The A5 Air eliminates metal-on-metal contact which essentially solves the vibration problem.

(Note that most of their adult models also have these anti-rattle inserts now.)

Even though the air tires add a couple pounds above and beyond the baseline A5, it’s still easy to carry.

The dimensions are quite similar, and it takes perhaps 5-10 seconds to fold and unfold. It’s a piece of cake to get into and out of shops, transit, and the like.

That might not sound like a big deal, but remember that most air-tire scooters are significantly larger (what are known as “foot-bikes”). That brings speed and stability, but their size and weight are impractical.

That’s why the A5 Air strikes a good balance. Steady enough over typical city streets, but portable enough to be worth using for daily life.

The deck height is comfortable (but there’s a catch)

You’d think your kicking leg would get tired first. After all, it’s called a kick scooter.

But the truth is that your standing leg fatigues first. It bears most of your weight in a slight bend, like a one-legged partial squat or wall-sit.

Naturally, the lower the deck, the deeper that squat gets.

The A5 Air has probably the lowest deck I’ve come across. That’s a welcome feature as you’re cruising around. Simply pointing your toe is enough for gentle kicks. To push harder, you won’t have to squat down very far at all, either.

It’s not the easiest thing to photograph, but this might give you an idea.

A5 Air Quirks & Issues To Think About

The A5 Air is well-designed on the whole. It works exactly as intended and is useful in a wider range of conditions than most scooters can handle.

But there are a few things to think twice about. A couple are silly oversights, but a couple may be deal-breakers for some scenarios.

Watch for scraping or getting high-centered

Again, the A5 Air has a low deck that feels more comfortable and efficient than almost anything else.

But the catch–literally–is how easily it catches on uneven ground.

This effect is worse for heavier riders, since more weight compresses the tires more, which reduces clearance even further. Unfortunately, the tires cannot exceed 60 psi regardless of the rider’s weight.

So, even though the weight limit is technically 220 lbs, the high-centering issue will be worse at the upper end of that range.

But despite all that, it’s not too hard to avoid scraping the bottom.

Firstly, make sure you have enough light to see potential obstacles. That’s easy in daylight, but you’ll need good street lights and/or a bicycle headlight after dark.

Secondly, be extra cautious riding over leaves or debris. The air tires roll smoothly and grip well, but all that junk on the ground can camouflage obstacles that you might get high-centered on.

Third, when you have no choice but to ride over something obstructive, there’s a simple trick. Just time your kick to lift the scooter a couple inches as you pass over it. No need to jump up in the air; just raise it a couple inches.

To be clear, the low deck is not an outright problem. It’s just a trade-off. Raising the deck to avoid scraping would necessarily make it less comfortable and efficient.

And if you ride on such rough ground that it’s a continual problem, then you’d be better off with a much larger-wheel, taller-deck scooter like a Swifty (which I reviewed here).

However, the comfort and efficiency of a low deck helps offset another drawback, which is…

The only catch (or rather, trade-off) is that the A5 Air is noticeably slower on smooth surfaces compared to any scooter with urethane wheels.

These max out at 60 psi, which is fairly low for small tires. For comparison, my (much larger) 16″ Brompton bike and 16″ Swifty kick scooter both ran closer to 90 psi, albeit on narrower tires.

That adds up to higher rolling resistance than I’d like.

It’s a subtle but perpetual resistance, almost like facing a moderate headwind. All else being equal, I seem to go roughly 2/3rds as far per kick versus a scooter with urethane wheels.

That’s unnecessarily tiring if the pavement is good.

However, if the surface is rough enough to feel jarring, then the better absorption of air tires may actually let you go faster.

In brief, a smoother ride on rough terrain necessarily means a slower ride on good terrain. Think about where you’ll realistically ride before deciding that this is the one for you.

The rear fender-brake is too short to block water

This is the dumb flaw that the title of this review alludes to. It just doesn’t make sense! Allow me to explain…

Even in dry climates, you’ll inevitably roll over something wet. Drainage run-off, puddles, who knows. It’ll happen sooner or later. And here in the drizzly Northwest, it’s just about every day!

The A5 Air’s tires have good traction in these situations. The odds of it sliding out from under you are really small. You should still take it easy, but you don’t need to worry about water like you do on a model with urethane wheels.

The A5 Air’s fender brake doesn’t extend nearly far enough to keep you from getting sprayed as you ride. The coverage is no better than on the regular A5/A6.

I realize they’re based in southern California, where it’s not such a common problem. Still, the A5 Air already needed a unique fender for its wider tires, so they could have made that fender longer while they were at it.

But there’s a fix.

In fact, you can address this with a little ingenuity, and either a two-liter soda bottle or a few bucks at the hardware store for ~3mm-thick rubber.

(You shouldn’t have to do this in the first place, but hey! It’s better than a stripe of road grime up your legs and back.)

There’s no clip to hold the detached handlebars/grips

It’s a little tough to pull the grip portion of the handlebars out of the stem. That’s because of the plastic sleeve that prevents rattling (very effectively, I might add!).

I try not to pull them out unless necessary for storage or for really cramped quarters like a bus.

But when I do, they just dangle and swing around when carried. It’s a very mild nuisance, but a nuisance nonetheless.

It would be nice if they could clip into a little plastic collar on the stem. I vaguely remember that from my childhood Razor, so I’m not sure why they omitted that detail.

It’s a tiny complaint, though, and doesn’t affect my overall opinion.

Conclusion: Should You Get A Razor A5 Air?

You’ll enjoy the A5 Air if you find kick scooters fun or useful, but are sick of the jarring ride on imperfect asphalt.

Likewise, it’s a great option if you want to ride when it’s wet, but don’t want to spend significantly more on something like a Swifty. Just remember that fender brakes are terrible in the rain, so mind your speed. But traction is surprisingly good.

It’s a good enough deal to justify the hassle of creating your own mud flap for rainy rides. Again, I can’t imagine why it’s not included, but so it goes.

Conversely, skip this one if your routes are very smooth and seldom wet. If vibration or traction aren’t problems in the first place, then the added resistance of inflatable tires will only annoy you.

On the other end of the spectrum, very rough routes also demand a different scooter (or just a bicycle!) due to the lower deck height.

All in all, it’s surprisingly well made for a very reasonable price. If you need an adult kick scooter for quick transportation over short distances in real-life conditions, then the Razor A5 Air is hard to beat.

Get it here from Amazon.

Erik Bassett is the founder and editor of Two Wheels Better. He draws on three decades of cycling and scooter experience to help you find the right ride, incorporate it into daily life, and safely enjoy the journey.

View all of Erik Bassett's posts.