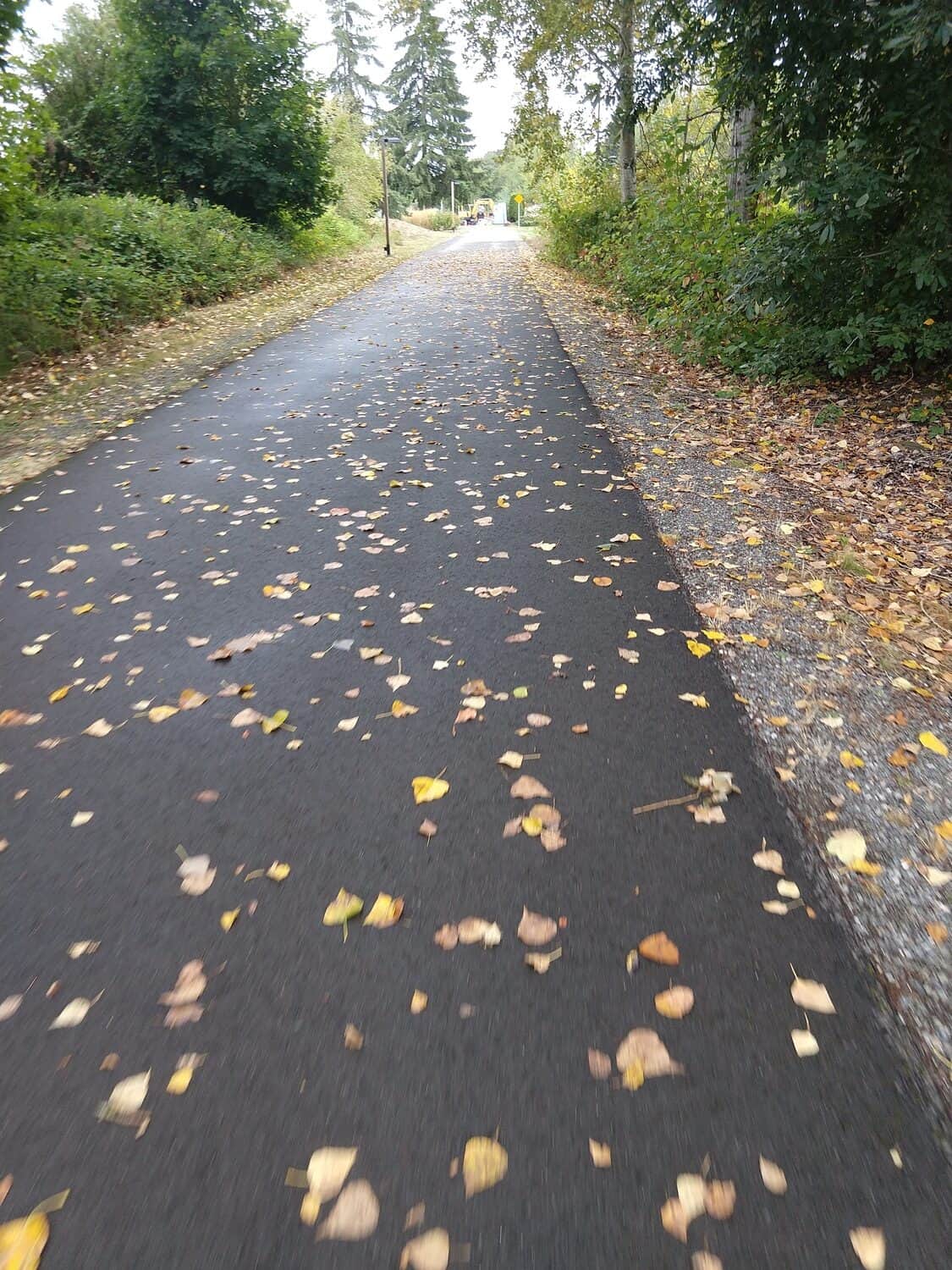 So you’re ready to head out on your scooter, but the weather seems to have other plans. It’s gray overhead, wet underfoot, and there’s no chance of sunshine any time soon.

That’ll make anyone think twice about their transportation.

But if you’ve still got to scoot to work, or just aren’t deterred by a drizzle, then you can still ride…with some precautions.

What to know about riding a kick scooter in the rain

It’s possible to ride a kick scooter in the rain, but it’s not ideal. Your braking distances will be longer, road paint and metal plates will be slick, and dangerous rain-filled potholes may appear like puddles. If possible, use a scooter with pneumatic (inflatable) tires since these grip the best in the rain. Hard tires, like urethane, have very poor traction so it’s critical to avoid sharp turns. Solid rubber tires are less dangerous, but still slippery.

All told, you probably can make your trip in the rain, but it takes more caution and awareness than you might be used to.

And depending on how often you ride in the rain, it might be worth buying a new scooter for safer travel.

Most kick scooters are water-friendly, not waterproof

Non-electric Razor scooters and most similar kick scooter designs, can easily handle getting wet. However, they are not fully waterproof, so they need a little extra care in wet weather.

Then again, Razor-style kick scooters aren’t ideal for wet rides in the first place, so let’s look at why that is.

Traction is the biggest problem with rain. That plays out in several ways, but we’ll focus on the two that are most important for safety: turning and braking.

Most adult kick scooters use very hard urethane wheels, since they roll quickly and require no maintenance. Unfortunately, they have very little traction. Frankly, that’s not a huge problem as long as you’re going in a straight line.

But turning? That’s another matter. It’s important to approach corners more slowly than usual and to turn more gently than usual. That minimizes sideways forces, which makes it less likely that the scooter will slide out from under you.

Here’s a good (and oddly relaxing) example of someone’s rainy-day ride on a Xootr. That brand uses perhaps the hardest, lowest-traction wheels of all, but his caution keeps him upright.

(I’ll stick with my Swifty in the rain, but good for him!)

The same caution applies to scooters with solid rubber wheels, as on the Kick-Ped. Those aren’t as slick as run-of-the-mill urethane wheels, but they’re still not all-conditions wheels, either.

If you get one of the few kick scooters with pneumatic (air-filled) tires, then you’ll be in far better shape. They’re essentially a scaled-down version of bicycle wheels, so take similar precautions to cycling in the rain. This does meaning turning gently, but it’s nowhere near as dicey or unnerving as with solid tires!

Fender brakes don’t do much

Most kick scooters have just a fender brake, and some add a hard brake “pad” as well.

Most fenders brakes have only modest power when it’s dry, and that all but disappears in the rain. As a general rule, try to ride how you would if you didn’t have brakes in the first place. That means lower speeds and a lot of foresight!

In other words, plan to avoid braking. Try instead to shed momentum and slow gradually as you roll.

With hard tires, it’s best to avoid using a front brake in the rain at all.

This is for two reasons. First, some just won’t work. Second, some will “kick in” quite abruptly as the friction/heat gets rid of some water. That’s perhaps even more dangerous, since sudden front braking may cause the wheel to lose traction and simply slip out from under you.

If you have air tires, then just like with turning, you can also brake more normally in the rain. Again, err on the side of caution like you would on a bicycle, but it’s a much safer endeavor all the way around.

You’re even less visible than you think

Rain makes it extremely hard for drivers to see out of their cars.

We’ve all had scary moments (and perhaps collisions) from drivers not paying adequate attention as we’re walking, cycling, scooting, or doing much of anything else outside a vehicle.

But when it’s raining, keep in mind that they’re even likelier yet to miss you altogether, even at marked crosswalks and the like. Assume you’re invisible and ride accordingly—especially at night.

3 quick tips for safe kick-scooting in the rain

Besides keeping yourself safe, you’ll also want to think about how best to keep dry. It seems simple enough, but I’ve noticed a couple things that weren’t so obvious at first.

We’ve talked plenty about traction above, since that’s the fundamental challenge when it’s rainy.

But safety aside, it can also be tough to get a good, firm kick off of wet ground. Some shoes don’t grip that well, and wet leaves or debris can exacerbate the problem. That makes for hard work and slow going!

I’ve generally had the best luck in shoes with Vibram brand outsoles or other high-quality rubber soles.

Many city kick scooters have fenders, partly for braking and partly for general cleanliness.

But some rear fenders might not cover quite enough to block all water from spraying up your back. To block that potential spray, consider keeping you rain jacket on even after the rain has stopped following.

(True, rain jackets get a bit steamy when you’re exercising, but you’re probably going slowly enough due to wet pavement that sweating isn’t a big problem. Here’s a guide to stylish rain jackets for cycling, all of which are just as appropriate for kick-scooting.)

You might also get some front-wheel spray on your ankles. I’d highly recommend shoes/boots of at least ankle height. Soaking your socks with soggy road grime is nobody’s idea of a fun trip!

But before you go on an REI shopping spree, consider starting with your own closet. Whatever you’d wear to talk in the rain is the best starting point.

(You might also try cutting a mud flap out of vinyl or rubber sheeting from the hardware store. It’s easy to super-glue onto the rear fender, but may look out of place depending on the scooter’s color and finish.)

3. At night, brighter is better

If your route is less than brightly lit, then stick a bicycle headlight on your scooter’s handlebars and a flashing red light on your jacket or bag.

This might seem like overkill, but it’s the best way to maximize your visibility in dark, damp weather. (But it’s still prudent to assume you’re invisible to cars!)

Any halfway-decent bicycle lights should suffice, so start with the cheapest ones your local bike shop sells. It doesn’t take much power to be seen, and at such low speeds, illuminating your path isn’t a concern in the city.

Below are a few suggestions of scooters that should serve you well in wet weather.

Remember, just about anything can be used in the rain, but that doesn’t mean it should!

Kick scooters can work well for commuting (here’s why), and the Go-Ped Kick-Ped is a popular choice for that purpose.

It gets a sort of honorary mention for its sheer convenience.

This one actually has solid, non-inflatable tires, but they’re rubber rather than urethane. That does require extra caution in the rain, but it’s still a huge improvement from urethane ones.

Best for: short distances and/or transit use, with very low speeds in the rain

Choose another if: you need reliable braking or traction at higher speeds

For frequent wet-weather riding, it’s best to choose an adult kick scooter with pneumatic (inflatable) tires. Those aren’t very common, least of all on models as portable as a standard folding scooter.

But if you need great traction without losing portability, then the Razor A5 Air is a solid and readily available choice. Just keep in mind that its deck is unusually low, so you’ll need to exercise care on broken-up sidewalks and the like. I’ve reviewed it here in full.

Best for: more extended riding in wet and/or rough terrain at low speeds

Choose another if: you need reliable braking at higher speeds, or are on the larger side

For sheer ride quality: Swifty Zero or One (available here)

These are in another league from most adult kick scooters. They’re much bigger and much more expensive…but also much more capable. Check out my full review to learn why.

Best of all, they have bicycle-style wheels and brakes that work reliably in the rain. No more stomping on a fender waiting for something to happen!

The One is a cleverly folding option that may suit transit users or those with limited storage space. The Zero is a less expensive, non-folding option that offers the same general riding experience. (They also make a third model—the Air—but it’s a burlier design primarily for stunts and off-road riding.)

Best for: extended riding in all conditions and on all (reasonable) terrain

Choose another if: you’re on a budget

We’d all rather ride in the sunshine. But sometimes, nature says otherwise.

Fortunately, it’s at least possible to ride a kick scooter in the rain. Not necessarily fun or fast or easy, but possible.

Start with the above tips to help keep you safe. So relax, take it easy, and choose the right gear to keep yourself active no matter the weather!