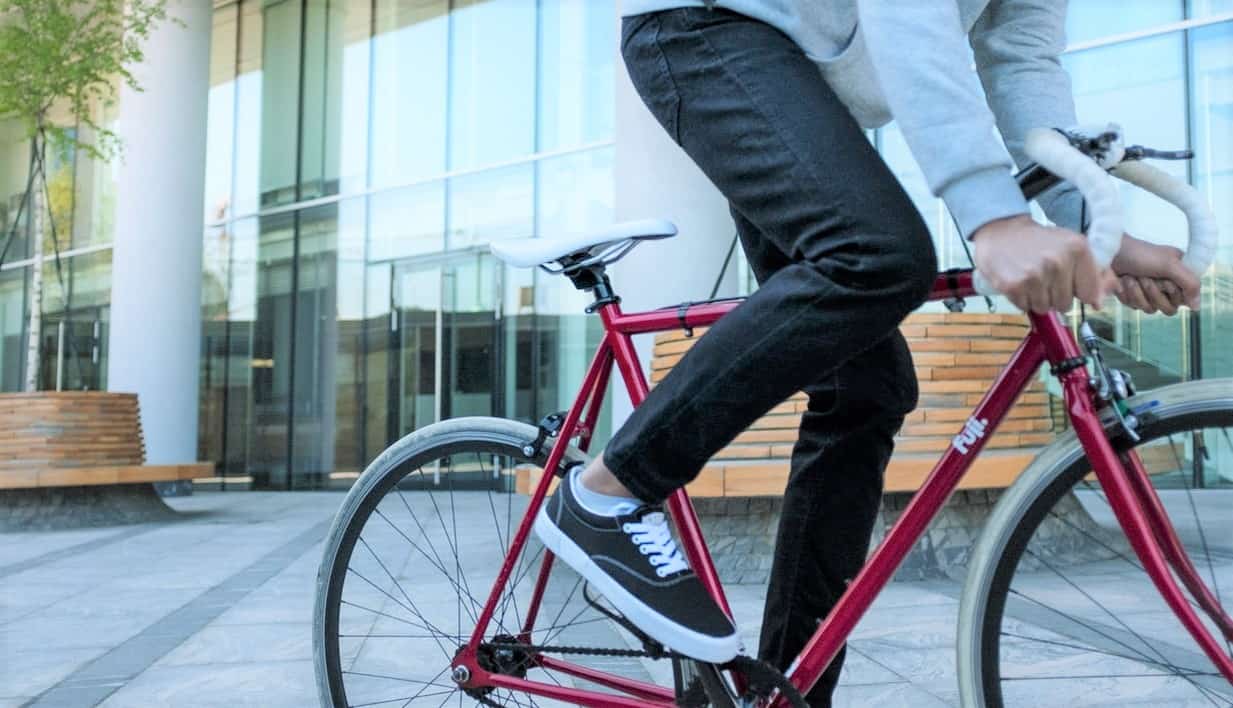 I spent a cumulative year or two tackling my hilly commute on single-speed bikes. One was a svelte cyclocross racer, the other was a comfy, upright city bike, and both taught me a few things worth sharing.

Now, why subject myself to a hilly commute on a single-speed? Sheer curiosity, mostly, plus I do like the aesthetic.

It was a one-person experiment to see whether it was possible, reasonable, and perhaps a bit fun.

The results? A clear “yes” to all the above.

But despite the extra effort, there’s a simple joy in riding without shifting.

(If the whole notion of riding a single-speed seems strange, then the background info I shared here might be a better starting point.)

It’s Always The Right Gear (& The Glass Is Half-Full)

Pessimists will say that your single gear is always the wrong one.

And if your approach to cycling involves head-to-toe Lycra and anally retentive cadence counting, it certainly is.

On the other hand, I would argue that it’s always the right one.

You’ll spin like mad on occasion. You’ll grind and grunt up hills. You’ll probably even have to pick a different bike for carrying heavy loads up big hills.

But you’ll also enjoy the blissfully simple counterpart to the decision overload that every other aspect of life brings.

And even in the worst case, I’ve never met a (paved) hill too steep to walk up.

It’s Liberating Not To Care About Gears

Even if I poke fun at more hardcore cyclists who obsess over gearing, they are still onto something.

Your body does sort of prefer to pedal at one rate most of the time. However, when you’re constantly shifting up and down to maintain that, the otherwise relaxing experience of cycling turns into…something else. Not something bad, but not as much of a mental break, either.

There’s clarity in simplicity, and that’s what keeps so many of us coming back to a single-speed.

A Gear Is Good For Climbing Or Descending

Any gear that’s decent for climbing is too low for descending.

Any gear that’s suitable for descents is way too high to make it up the other side.

You’ve got to pick one of the two, though. And since coasting downhill beats hoofing it uphill, then err toward the former.

And then, best of all, you never need to think about it again.

While we’re talking about gear choices, here’s something I didn’t expect at first.

In other words, let’s say you shifted a geared bike into what felt like a good all-around ratio. You then got a single-speed, with a similar riding position, and set it up with the same ratio. The latter would almost certainly feel just a bit quicker and easier, even though it’s mechanically identical.

You wouldn’t think it would matter, yet it does.

I attribute the difference to a lack of friction. Without the rear derailleur wrapping your chain around two additional cogs, the whole drivetrain conserves just a tiny bit more energy. That means you get a little more out of each pedal stroke–and believe me, you’ll want it!

To be clear, it’s not a game-changing difference. But it’s noticeable, and it’s even led me to increase my gearing by about 5% (in gear-inches).

It may sound a little hard to believe, but if you have the chance to compare, I can almost promise you’ll notice.

Your Legs Need A Couple Weeks To Adjust

If your route is hilly, then your legs should stop aching after the first couple weeks.

Grinding out the climbs is undoubtedly part of the reason.

But I’d theorize that the other part has to do with different pedaling cadences. A single-speed forces you to spin like crazy at some times, then barely even keep the pedals moving at others.

This seems to fatigue leg muscles at a little difference rate compared to staying at whatever moderate cadence we naturally prefer.

You May Still Be Faster Than You’d Expect

As you get into the single-speed groove, you may find yourself passing riders on geared bikes despite not trying to.

That caught me by surprise, frankly, since a speed record is the last thing I’m chasing on the way to work.

It usually happens on a very slight incline, the kind that’s noticeably not flat but still too shallow to call a “climb.”

My hypothesis? The convenience of gears tells us that we ought to start backing off or seeking less resistance. On a single-speed, we don’t have quite that same reflex.

Chalk it up to getting comfortable at different cadences, I suppose.

Use This Technique For Better Climbing

When you hit an actual hill, geared riders are simply at an advantage. But if you’re up for a bit of exercise, then you can still climb surprisingly quickly.

When there’s a long ascent ahead, try to think about driving your heel into the ground. The ball of your foot stays in the center of the pedal, as it always should, but you imagine leading the pedal stroke with your heel.

This keeps your ankle bent, thereby letting you extend your leg a little further, which gives your burning quads some relief.

Alternatively, or for more ultra-steep spots, engage your hamstrings and calves by trying to “scrape” your soles on the pedals.

If you’ll need to stand up, then do it before you run out of steam sitting down.

This isn’t just a physical tip, but a mental one.

It’s not much of a psychological effort to stand up and keep going. But it can be daunting and discouraging to pick back up from a standstill, so that’s best avoided in the first place.

Not a bad metaphor for life in general, if you think about it…

Fatter Tires Are Your Friend

Speaking of momentum, lightweight but fatter tires can help preserve it.

Now, you might expect fatter tires to slow you down terribly. After all, racing bikes always have the narrowest tires.

It turns out that’s not quite true. Excess rotating weight does make it harder to accelerate, but a wider tire can actually make you faster over rough surfaces.

The reason has to do with compliance.

A narrow tire at high pressure will be jolted around by bumps in the ground. A fatter and softer tire will simply absorb them and conserve your forward momentum.

Seeing how important momentum is on a single-speed, it’s worth mounting the widest (lightweight) tires your bike can accommodate.

Single-speed cycling isn’t for everyone, but it’s a great way to enjoy city riding in its simplest form.

There’s much less drivetrain maintenance, which nobody enjoys. It also makes you a physically stronger rider, assuming you don’t mind struggling up hills on occasion.

But the bigger benefit is freeing your mind of the option and the need to shift gears.

Most of us make tiny decisions all day long at work. We spend many waking hours optimizing for one outcome after another.

Sometimes it’s good to leave that all behind, if only for a few miles.