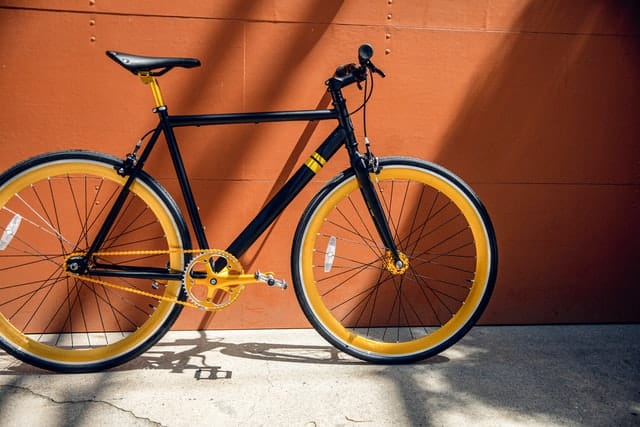 Bicycles keep on getting more expensive, and price is a legitimate problem for many people who’d love to ride.

If you’re trying to save on a bike, then you’ve probably noticed Target’s wide range and rock-bottom prices.

But are bikes at Target actually worth your hard-earned money?

Most bikes sold at Target are of extremely low quality, and are often improperly assembled or tuned. That’s bad for safety and enjoyment, and it adds hidden costs of ownership. You’re better off spending more at a bicycle shop, or simply purchasing a secondhand bike from a respected brand.

To be fair, they’re not unreasonable if you’ll only make short, gentle trips once in a while. Even so, you’ll have more fun and fewer headaches on a used bike for about the same price.

Now, before I start sounding like a bicycle brand snob, let’s get into exactly what makes Target bikes a bad idea.

(This also applies to all other big-box stores, department stores, etc.)

Brands aren’t what they may seem

You might see familiar brand names that had a great reputation in years past. However, those names are often sold to unrelated, low-end manufacturers who want to evoke that old quality.

For instance, a Schwinn at Target and a vintage Schwinn touring bike actually come from entirely different companies.

Other brands may also have separate lines for big-box stores. For instance, Mongoose has (occasionally) sold some decent mountain, road, and gravel bikes in recent years.

Unfortunately, not one of them has graced the shelves of a Target store. But that’s probably for the better, because…

When a new bicycle is delivered, there’s still some assembly left for retailers to do. These last steps include things like fork installation and brake adjustment, which are critical for safety. They also need to fine-tune the drivetrain so you’ll enjoy crisp, precise shifting.

Target doesn’t have a staff of dedicated bike mechanics (as of writing), so there’s no calling who will actually do the assembly. While some employees are probably more mechanically adept than others, it’s safe to assume they’re not qualified mechanics.

Unfortunately, the typical off-the-rack assembly quality bears witness to this.

For instance, it’s horrifyingly common to see bikes with the fork installed backward! I don’t have any Target photos handy, but here’s an example from a comparable retailer.

Assuming things are (kinda sorta) properly set up, there’s the question of whether they’ll last.

Target brands use the cheapest available parts to keep prices down. Unfortunately, that means heavy alloys, weak springs, imprecise adjusters, and so forth. The result is imprecise shifting, weak and unpredictable braking, and a lot of unnecessary weight.

There are hidden costs of ownership

The most compelling reason to buy a Target bike is price. However, as a newer cyclist, it’s easy to overlook all the long-run costs associated with your bicycle.

All parts wear out eventually, but the combination of improper assembly and minimal quality on Target bikes means you’ll replace them much more frequently than you’d like.

It’s hard to predict exactly what will go wrong, but don’t be surprised if the parts and maintenance are actually more than the upfront price of the entire bike.

Here is a helpful Reddit comment that gives a pretty typical example: this person put over $400 into a “cheap” $150 bike. Unfortunately, that’s a common experience.

For casual riding, it only takes about three sizes to cover 90% of adult riders. However, most Target bikes come in a single size. And while it may be the right size for you, there’s no way to know.

You can normally get a sense of the fit from geometry charts, but those are not available. Nor is realistic to expect an employee to be a competent bike-fitter, either.

Aggressive/off-road riding is out of the question

No matter how they’re marketed, think twice about using Target bikes for mountain biking or any other form of aggressive riding. Appearances can be deceiving, so it’s hard for new cyclists to know whether tough-looking bikes are actually trustworthy, or merely for show.

That’s not unique to mountain biking, either. The same applies to BMX. Dirt-cheap BMX bikes for kids may survive cruising the neighborhood, but I wouldn’t trust them with my own kids’ safety at the skate park.

When you’re on a tight budget, then it’s even more important to buy a bike that will last a long time (with minimal maintenance surprises).

If that’s you, then here are two options that’ll stretch your money much farther than a regrettable big-box bike.

(And no, buying from Amazon isn’t one of them. It’s arguably a better option, but still prone to a lot of the same issues. Visit this article for a closer look.)

1. Save just a bit more cash

I know, I know, saving takes a while. And sometimes it’s just hard.

Rather than spending around $200-$300 for a Target bike, see if you can scrape together closer to $500 for something from a bike shop. You might also try reputable direct-to-consumer brand like Brooklyn or Priority.

If a hybrid bike is more your style, then these are some of my favorite all-around hybrid bikes near that price—just to give you a few more ideas.

The right used bicycle will give you excellent quality at Target prices. If you’re confident choosing a bike (or better yet, you have a friend who can help), then it’s unquestionably the best deal.

You can reasonably plan on paying 50% of retail prices for a bike that’s a few years old with light cosmetic wear but no mechanical issues. That’s a very rough estimate, of course, and I’ve often paid less.

The Bicycle Blue Book can give you a very general estimate for the specific bike you’re considering. However, unlike the “real” blue book for autos, it’s not something bike buyers or sellers take very seriously. It’ll just help keep you from offering (or accepting) a wildly low or high price.

Target bike prices are appealing, but their quality and assembly are too poor to justify any amount of money.

A used bicycle is a far better alternative at a similar price.

But if you’re able to spend a little more, then you can buy several excellent name-brand bikes for a couple hundred dollars more. That’s enough for a worthwhile but affordable hybrid like these.

And if you’re curious about city/urban/commuter bike pricing in general, then this guide to learn where to spend versus save.

Finally, if you’re shopping on a budget for the cyclist in your life, consider one of these gift ideas for something smaller but far longer lasting.