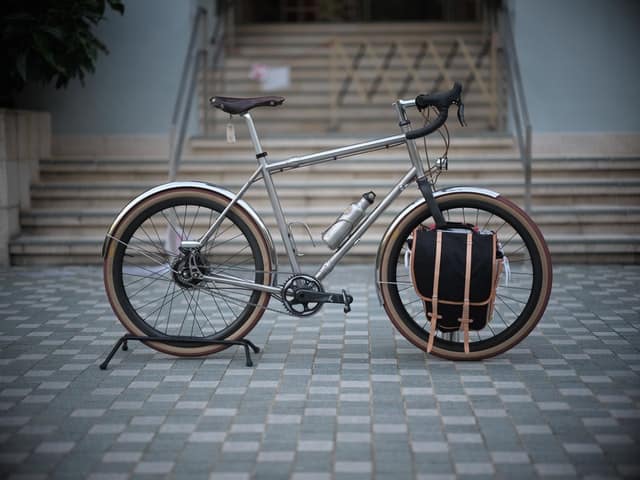 Not all drop-bar bikes are created equal.

Some are for sprinting down a race course, others are for chugging along with a week’s worth of camping gear.

The latter aren’t exactly speedy…but in spite of their heft, they’re becoming more popular than ever.

So, let’s see what touring bikes bring to the table, and whether they deserve a place in your stable.

First off, are touring bikes are fast?

No, touring bikes are not particularly fast. They have a more upright riding position, heavier frame and wheels, and wider tires than other road bikes. This is comfortable and practical for everyday riding, but makes it hard to sustain a fast pace for competitive road riding.

Keep in mind that you the rider are the engine. A “fast” bike minimizes resistance against your effort, but that effort comes from you!

A strong and fit cyclist would still be faster on a touring bike—maybe even on a big, old Dutch bike—than an out-of-shape cyclist on an ultra-light road racing rocket.

Touring bikes look like other road bikes at a glance. However, they’re slower (and more practical) because of a few major differences.

Slightly upright posture keeps you comfortable for long hours in the saddle. You lose the aerodynamics and raw power of a deep, racing-style lean…but you also avoid the neck strain.

Heavier wheels are made to withstand large loads over bumpy ground. Not only are the rims beefier, but they often have 36 spokes per wheel versus the 18-28 on racing/endurance bikes.

(Incidentally, some use 26″ wheels instead of the usual 700c/29″. The smaller diameter reduces weight slightly, but the real benefits are the ease of finding replacements in remote places, better torsional strength, and perhaps room for a wider tire.)

Wider tires provide traction and cushion. There’s more surface area to contact the ground, and more air volume to soak up irregularities. That does increase rolling resistance (past a point) but it’s essential with heavy gear, bad roads, or excursions onto dirt/gravel.

All the above mean more weight and less efficiency, but that’s not necessarily slower in real life.

Real-world riding context matters. A touring bike is undoubtedly slower in a wind tunnel or a road race, but not necessarily slower in your daily riding scenarios.

That sounds paradoxical, but if a “faster” bike has more mechanical issues, is less surefooted over rough roads, and makes you take more breaks to relieve your neck, then is it actually faster?

Over hundreds of miles…probably not.

What else are touring bikes good for?

A touring bike may be perfect even if you’ll never haul yourself and your gear across the state/country/continent.

They’re designed for carrying things comfortably and smoothly, over potentially rough pavement, for long hours in the saddle.

But those capabilities are useful in other settings.

For example, they can be great for commuting. The distance is far less, but commuters often have exactly the same need for carrying luggage steadily, over bad streets, at modest speeds.

They also make decent gravel bikes. Wide tires; fairly long, low, and slack geometry; strong, resilient frames. They check most of the boxes, even if they’re not as sleek as a dedicated gravel bike.

They can also work for bikepacking, especially if you max out tire width, remove any fenders, and perhaps swap out the drop bars.

If you’re not familiar with bikepacking, it’s exactly what the name suggests: using a bike to explore and camp, like you’d do when backpacking.

Compared to touring, bikepacking entails less gear but rougher terrain. Most avid bikepackers end up with a dedicated bike, but a touring bike is a great way to test the waters without going all-in.

(Note that not all touring bikes are up for extremely rugged off-road riding. If you anticipate boulders and steep, rooty descents, then you’ll want a more dedicated dirt tourer with the frame strength and tire size to handle it.)

All in all, touring bikes are slower than other road bikes due to their robust construction and a riding position that favors comfort over power. However, they’re more practical for any situations where speed isn’t the main goal.

If you want an up-for-anything bike that doesn’t lock you into a single style of riding, then a touring bike belong on your shortlist.

Nearly every manufacturer sells a suitable bike or two, and brands like Surly have unique models for every type of touring under the Sun.

Or, if you’ll mostly ride in town, then city and hybrid bikes can serve the same practical purposes—often at a lower price and with an even more upright, relaxed posture.