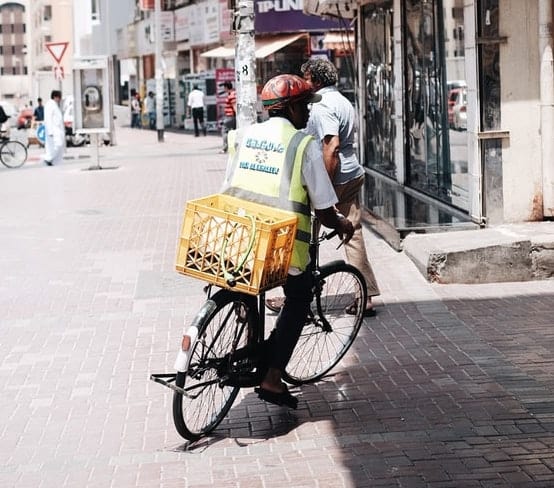 Most of us take up cycling for recreation or fitness, but bikes are every bit as practical as they are fun.

Believe it or not, a human being on a bike is the most energy-efficient form of human or animal movement we know of. And with the advent of electric bikes, even severe hills and extraordinary distances are less forbidding.

In some form or another, bicycles are conducive to all sorts of uses in everyday life. Many are obvious, as we’ll see in a moment, but some may come as a surprise.

Virtually ever city has at least some contingent of local bike commuters. Authorities in many car-centric cities are realizing that cycling is one of the best ways to reduce traffic, prevent environmental harm, and encourage public health and fitness…all with a very modest amount of well-planned infrastructure.

On an individual level, biking to work to work is a terrific strategy to get exercise, save money, and avoid gridlock all at once.

Bike commuting rates remain low in most of the world due to longstanding auto-industry influence and sprawling development patterns. But as energy and ecological crises loom, many locales are already taking inspiration [from the Netherlands]() and making bicycle mobility a high priority.

Cycling is an efficient way to run local errands. A basic backpack, basket, or pannier (here’s a guide) makes carrying groceries or small purchase a breeze.

But what about more heavyweight tasks? No problem! Many who truly rely on two wheels use a cargo bike or bakfiets (“box bike”) for massive carrying capacity that rivals a small automobile.

In the bigger picture, this is a prudent and even necessary way to live. That’s true in dense areas, of course, but also in sparser ones where expensive roads serve relatively few people. That’s because, a staggering percentage of car trips are actually just local errands—even in the suburbs! Depending on the study, roughly half are under 4 miles and a third are under 2 miles! That means a great deal of energy and congestion come from errands that are actually within quick and comfortable cycling distance. Or at least they would be…but for a lack of infrastructure that renders some of these trips a bit hair-raising by bike.

Ever seen—or worse yet, been stuck in—the line of minivans snaking its way through the school’s drop-off area? And ever noticed how that drop-off area only seems to move more slowly every year, backing up traffic even beyond the school grounds?

You won’t be surprised to hear that bicycles help in a big way. In cities that have made the effort to provide family-friendly cycling routes, some parents are turning to city and cargo bikes to handle chauffeuring duties. With the right set-up, it’s even possible to transport a couple of kids, simultaneously, with some protection from the elements.

And in places with more forward-thinking urban planning (e.g., much of central and northern Europe), it’s actually the norm for children to cycle to school alone. It’s exercise and independence for them, and a load off for the parents!

Bicycle delivery and courier services have been a feature of city life for well over a century. And in the 1980s and 1990s, the urban bike-messenger scene grew into a proper subculture in its own right. Electronic communication has replaced a lot of the paperwork that kept messengers busy, but there will always be bigger items to deliver downtown, where trucks are inefficient and unwelcome.

Electric-assist bicycles have made cargo weight all but irrelevant, so some big-name couriers are testing them out in all sorts of locally appropriate variations.

Horse-mounted police are a quaint but iconic part of law enforcement. But even though mounted units are disappearing, bicycle patrols seem here to stay.

That’s fair enough, seeing as bicycles off all the range, speed, and mobility that horses do, but without the expense, complications, or—let’s be frank—poop.

Even though bike officers spend most of their time on pavement, they typically ride MTB-style bikes with front suspension and fat (but slick) tires, presumably in case a (not-so-)high-speed chase requires hopping curbs and plowing through potholes.

Last and by far most obvious is something we could all use more of each day: good old-fashioned outdoor activity. From coasting in the sunshine to tackling mountain passes or boundary-pushing stunts, there are dozens of ways to approach cycling as a [sport or hobby]()…and even both at the same time.

Whether you emphasize exercise or simply relish fresh-air freedom, a bicycle is tough to beat. It does cost something to get started, but cycling isn’t necessarily expensive for a potentially lifelong pursuit.

Bicycles are also a practical way to move people and things around town.

And perhaps most commonly, they’re a fun and rewarding way to increase your fitness while enjoying the scenery.