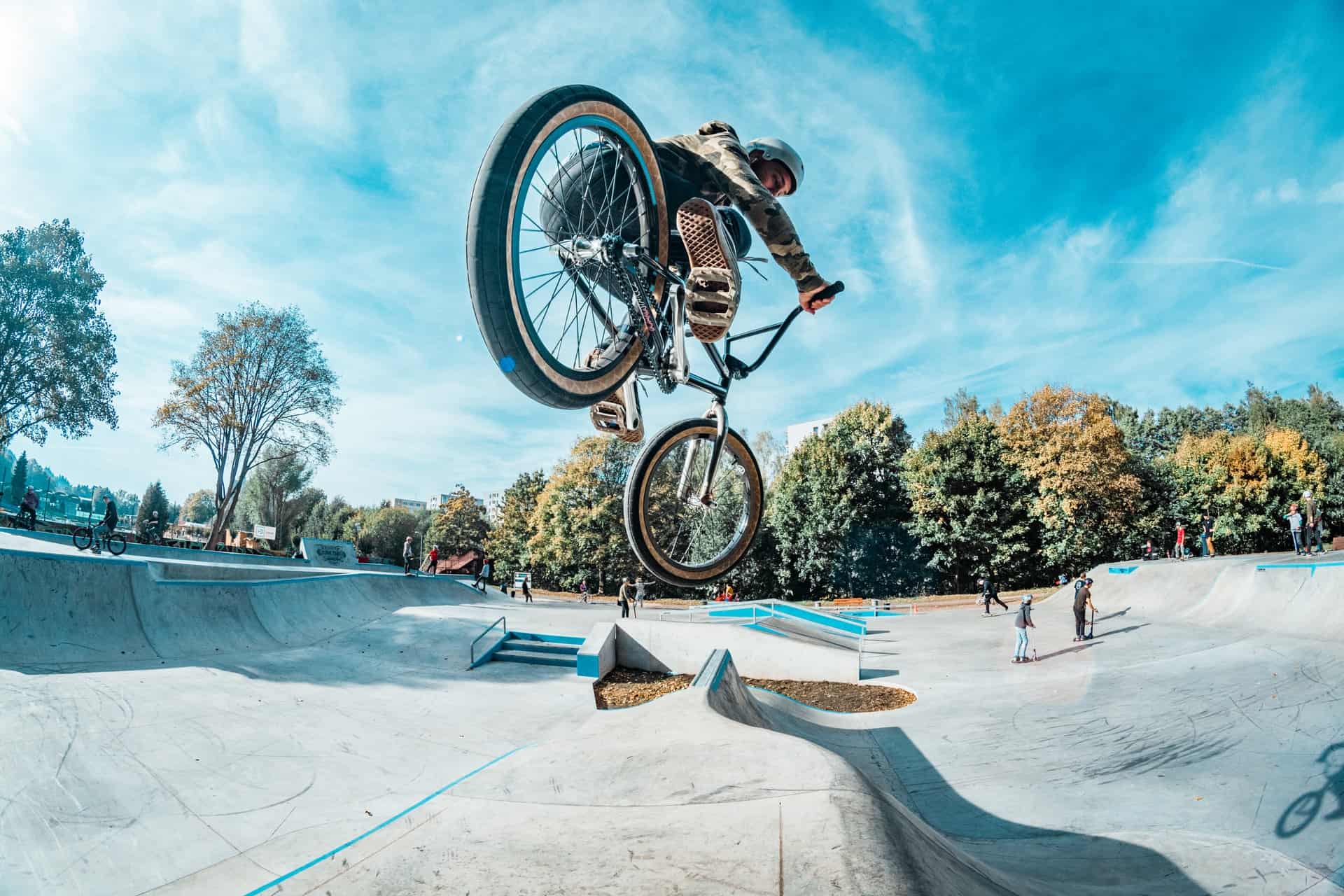 The most practical commuter bike is the one that’s on hand.

But if that one is a BMX bike, made for flying around the park or track or jumps, then you might be second-guessing whether it makes sense for commuting.

Having bike commuted for years and also spent a little time riding BMX, below is what I’d suggest.

Here’s whether you can commute on a BMX bike

It’s possible to commute on a BMX bike, but they’re highly impractical for more than very short distances (perhaps a couple of miles). The main issues are an uncomfortable riding position, lack of rack and fender mounts, limited braking power, overly snappy handling, and few gears.

Contrary to popular belief, wheel size is not a problem, since many folding commuter bikes have even smaller wheels.

Below, we’ll look at how these things affect your ride to work or school.

1. Riding position is the biggest issue

Standing up while you ride is absolutely necessary for aggressive riding, tricks, and the like. In fact, it’s really the only option.

But commuting is precisely the opposite: sitting down is where it’s at. And after perhaps a mile or two, you’ll wish you could!

On most BMX bikes, the seatpost is nowhere near long enough to allow full leg extension when seated.

Unless you want to look and feel like a circus bear on a tricycle, you’ve got to stand the entire time! And that’s bear-able for a couple of miles, but quickly becomes tiring before long.

2. Gearing may be a problem

All BMX bikes have a single speed, and contrary to popular believe, single-speed commuting can work out very well. Check out this article if you’re curious why.

But the problem is what that one gear is.

Most BMX bikes have roughly 55″ gearing. That means one full circle of a the pedals moves you forward 55″. Higher numbers mean you’re moving farther, of course, which is more work but allows for higher speed. (And vice-versa for lower gear-inch number.)

55″ is very low by urban cycling standards, but it’s great for the quick acceleration and modest speeds you need in BMX.

But for bike commuting, single-speed riders typically choose something around 65″-75″ depending on their terrain. That won’t let you accelerate like a jackrabbit out the gate, but it will make average commute times quite a bit shorter. More importantly, it prevents you from having to pedal like crazy just to maintain a reasonable speed.

It’s usually inexpensive and fairly easy to change the gearing yourself. However, changing it to a commute-friendly gear will render your BMX bike almost useless for BMX.

3. There’s no easy way to mount a rack or fenders

Despite all the cool commuter bike accessories, only a handful are almost always necessary. There’s a full explanation here, but fenders and a rack are at the top of the list.

However, racks and fenders are difficult to find in sizes that work for 20″ BMX wheels. And if/when you do find them, mounting them will be difficult without the eyelets and screws that more practical bicycles have built in. It is probably possible, with a little ingenuity and a few trips to the clamps-and-fasteners aisle of the hardware store, but it’s not pretty.

Even if you do somehow manage to mount them, you’ll need to take them right back off for actual BMX riding.

So, the more realistic alternative is to a) accept getting splashed and b) wear a backpack and find a way to deal with the back sweat. That’s not ideal for most commuters, hence the nearly universal racks and fenders.

4. Braking may be too weak for safety

Brakes on BMX bikes are generally there just to reduce speed and allow for a little correction. They’re not there for emergency stops, least of all in wet weather.

Consequently, BMX brakes tend not to have much power. That’s for the better on the track or at the skatepark, where slamming on the brakes would cause a pile-up. Plus, it’s simply the sign of a terrible rider!

But in the city, there’s a lot you can’t control. Unexpected obstacles, careless drivers, sudden red lights; these call for hard braking, and often in the rain.

What’s more, keep in mind that BMX bikes usually don’t have a front brake at all. The front brake has the vast majority of braking power: around 70%, and increasing as you brake harder and your center of gravity shifts forward. That’s a lot to give up, and it makes quick stops effectively impossible at more than few miles per hour.

With that in mind, take exceptional precautions if you do decide to try commuting on a typical BMX bike with only a rear brake. In addition to standard safety tactics like these, you’ll want to assume a very, very long stopping distance.

Even then, of course, there’s just no way to accommodate surprises. And surprises do happen.

The short chainstay length (crank to rear axle) is great for whipping them around in the air. And it’s a piece of cake to shift you weight backwards to manual.

But when you’re cruising along in the bike lane, that’s not a good thing. Most city bikes are designed exactly opposite, with extended chainstays to maximize stability.

The generally snappy handling of a BMX bike is also due in part to the steep head tube angle. That’s basically the angle at which a line from the stem, down through the fork, would hit the ground. Steeper angles are extremely quick and responsive to turn, but that agility becomes disconcerting when all you want is a straight line or gentle turn on the road.

If you’re accustomed to riding a BMX bike, then you’ve probably adapted to this, and subconsciously handle the bike more delicately. But if you haven’t already spent much time on a BMX bike, then the squirrelly feeling may be alarming when you’re trying to cruise through busy traffic and bad roads.

You might have thought that 20″ BMX wheels would be the biggest problem of all.

But that’s not the case.

In fact, many commuters ride folding bikes with 20″ or even 16″ wheels (like my beloved Brompton) every day without issue.

They’ll never roll as smoothly as full-size wheels, but 20″ with roughly 2″-wide tires is plenty smooth for typically commuting terrain.

Unless your route is littered with potholes, BMX wheel size will not be a problem at all.

7. Great alternatives can be very affordable

Clearly, it doesn’t make sense to buy a a BMX bike specifically for commuting.

But if you already have one on hand, then at least it’s a free way to see whether bike commuting works for you. Just keep in mind the safety and convenience points above, since they’re different from what you’d experience on any other type of bike.

However, excellent commuter bikes are not terribly expensive.

A good starting point for something worth owning is around $400 brand new, although used bike will of course be significantly less. Check out this guide to city bike prices as well as these great values at a few different price points, just to get a sense of what’s out there.

It might not make sense to take the plunge on a dedicated commuter just yet, but in the long run, you’ll appreciate its features for utilitarian riding.

Besides, you’ll have that much more to look forward to when you hop on the BMX bike for a park or jump session on the weekend!