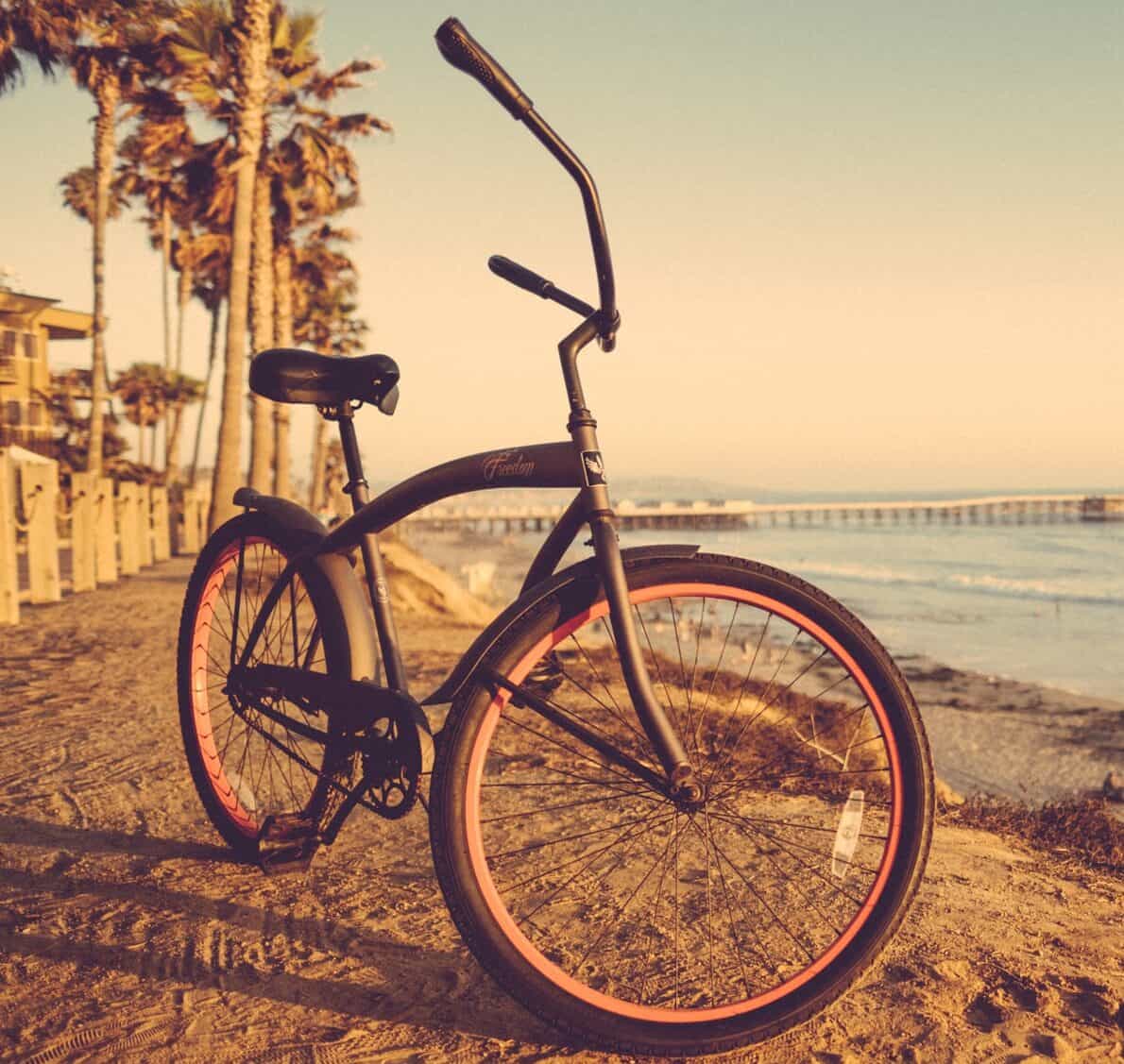 Cruisers are one of the most iconic bike styles ever devised. Very few others have the same power to conjure a whole scene in your head.

But that doesn’t always translate to practicality…

And as we’ll see, cruisers are fun to ride in the right setting, but downright tough in others.

Here’s whether cruisers are hard to ride

Cruiser bicycles are easy to ride on flat, straight routes but very hard to ride up steep hills and to navigate tight turns. That’s because of their signature traits: relaxed riding posture, balloon tires, and long wheelbase.

Those attributes are great for comfort…at the cost of efficiency and precise handling.

Cruisers are also heavier than most, which makes acceleration and climbing all the more difficult.

It’s possible to ride a cruiser many miles, but long rides are harder and slower than on other bikes. There’s a ton of wind resistance in the upright riding position, as well as rolling resistance from the extra-wide tires.

Contrary to popular belief, their weight isn’t a big problem for long distances. It does require more effort to get moving in the first place (you know, an object at rest…) but it’s not dramatically more effort to keep rolling. It’s only likely to be an issue if your long rides also involves a lot of stop-and-go.

Weight may become a problem on hills, but the riding position and single speed are far bigger limitations. More on that a bit later.

When you’re that upright, your torso is like a sail. As the miles add up, so does the cumulative energy you’ve spent fighting the wind. That’s exactly why races lean and tuck so far forward.

Additionally, upright posture makes it harder to involve your glutes in the pedal stroke. That’s generally no problem for short rides, but it slows you down over the long haul.

Most cruisers are terrible on hills

Cruisers may be the worst possible bicycle for hills. The weight doesn’t help, but the real challenge is they’re usually single-speed bikes, and the ride position is both inefficient when seated and awkward when standing.

Single-speed cruisers are the most traditional design. That one speed is chosen for their “native habitat” of beachfront rambling, so it’s far too stiff of a gear for ascending hills.

Normally, single-speed riders get more power on climbs by standing up. Simple enough…but the only problem is cruiser-style handlebars sweep back so dramatically that it’s awkward to pedal while standing up.

Some models, like most of the Electra Townie line, offer multi-speed drivetrains that make them more practical.

As mentioned above, the uprightness also make it harder to use your glutes to strengthen your pedal stroke. You can overcome that by leaning forward as you climb, to reduce the angle between your legs and torso.

Still, you may need to walk to the top of a steep hill. On the bright side, you’ll be comfortable coasting down the other side.

The issue with brakes

If you do make it up, then take care on the descent. Many cruisers only have a rear coaster brake, which is not nearly powerful enough to stop at high speeds. And I consider it unfit for riding near traffic, period.

Bottom line: slow down more and sooner than you think you need to!

If you can’t avoid quick descent and/or mingling with cars, then it’s worth spending a little more for a cruiser equipped with two hand-actuated rim brakes. (Or consider one of the alternatives suggested at the bottom of the page.)

So, what is a cruiser good for?

They’re ideal for taking in the scenery over short to moderate distances, at a mellow and uninterrupted pace.

In other words, for cruising—just as the name suggests.

If you picture a Southern California surfer rolling down the Venice boardwalk, no cares and no hurry, then you’ve got the right idea.

Surprisingly, most cruisers are not bad on flat dirt and gravel roads. The wide tires ride smoothly, even if they don’t have enough tread to grip in mud.

But tight, technical trails are where you’ll run into trouble. For one thing, rugged terrain probably violates the warranty and poses a breakage/safety hazard.

More practically, the sheer length of the bike will be extremely hard to maneuver. The gearing isn’t conducive to the quick ups and down on most trails, either.

Customization is a popular hobby

Riding scenarios aside, they’re fairly popular to customize and show off.

Some enthusiasts take aesthetic cues from motorcycles and turn their cruiser bicycles into completely unique, chromed-out choppers and the like.

That’s a whole scene that I know nothing about, so here’s a video featuring some incredible custom cruisers:

Should you get one? If not, then what?

Cruisers are easy and relaxing for very specific situations, but hard to ride in general. Then again, they were never supposed to be all-purpose bikes, so it’s not fair to hold that against them!

If you’re looking for a bicycle only for shorter, flatter leisure rides, then a cruiser fits the bill.

But if you want something for that purpose and others—like commuting, light dirt/gravel riding, or extend climbs—then you’d best look elsewhere.

For instance, a Dutch-style city bike is equally comfortable, but far better equipped with (available) wide gear ranges and heaps of useful accessories.

Alternatively, a hybrid feels sportier and less relaxed, but can cover a huge range of terrain and inclines.

There are many other types of bicycles, too, but those are probably the most useful alternatives.

At the end of the day, the right bike is simply whichever puts you at ease wherever you’ll realistically ride most of the time.