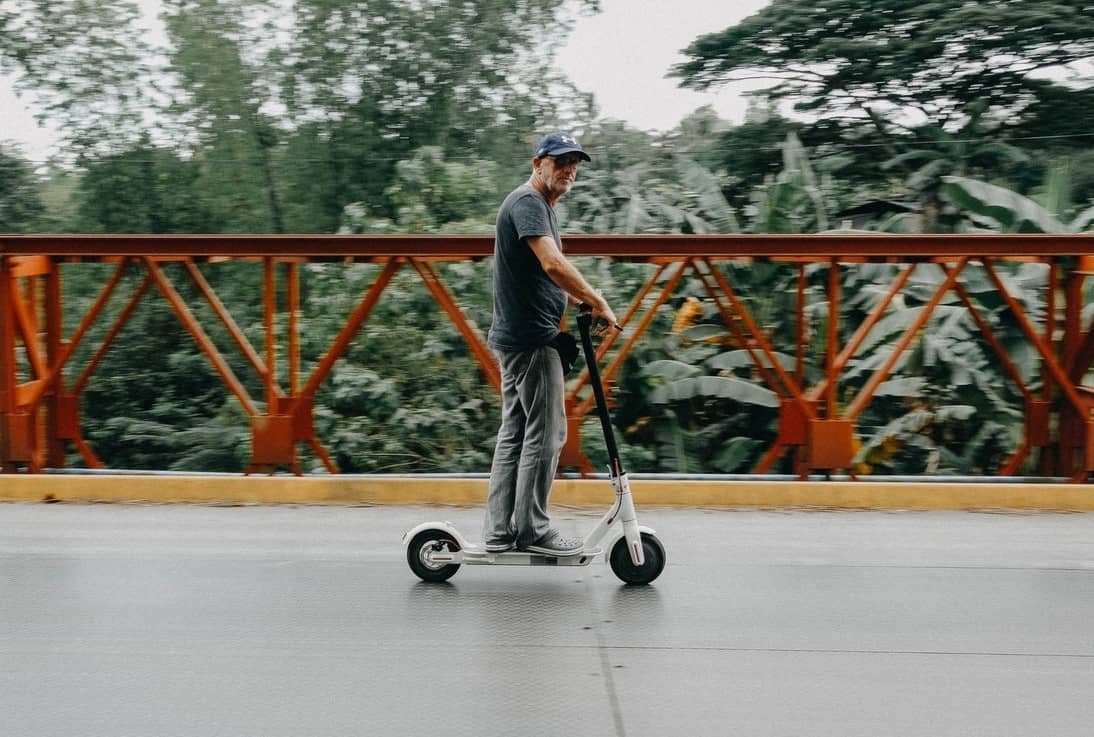 There have been far too many electric scooter horror stories in the news.

From trivial tumbles to terrifying (even fatal) crashes, it seems like riders are continually going down for one reason or another.

An alarmingly high number of crashes are for first-time riders, too. That suggests that riding an electric scooter safely really isn’t as intuitive as you might think.

Many of these things aren’t obvious to new riders. Scooters don’t really handle like bicycles, but require significantly more caution and awareness of the terrain. Adding in an electric throttle also makes it too easy to pick up a whole lot of speed!

So, it’s only fair to ask: how can you be safe on an electric scooter? Is it even possible?

Fortunately, anyone can take some simple steps to have a safe yet fun ride on an electric scooter.

Based on my experience, here are the most critical tips for riding an electric scooter safely.

1. Check your brakes, every time

It’s wise to do a quick safety check before you hop on any electric scooter–even your own.

After all, you’re entrusting your life to a fairly complex machine!

The number-one thing to look for is weak or unpredictable braking. Rental scooters get ridden hard, beaten up, and sometimes even vandalized. And as that happens, unfortunately, braking is usually the first problem.

Just find a clear stretch of pavement and try some gentle braking followed by an emergency stop. If the brakes don’t respond correctly, then stop riding immediately and submit a maintenance note or complaint through the scooter-share app.

2. Go slower than you think you need to

We all like to think we’ve got the reflexes and intuition of a MotoGP racer. It’s like something in our brains switches when we hop on a fun, quick, motorized vehicle.

However, reality doesn’t quite match up, so it’s easy to get in over your head. Accelerating is effortless, and we’re all a little over-confident in our riding skills (and luck!), which leads us into too much risk–even without seeking it.

The goal isn’t to inch along at a pointlessly slow speed. It’s just to avoid pushing ever upwards as higher speeds start to feel deceptively comfortable.

3. With braking, less is more

Even when electric scooter brakes are well designed and perfectly adjusted, they don’t always respond that quickly. And if they do, it’s easy for tires to slip into a brief skid.

That’s bad news–especially around cars or other obstacles!

When you foresee a stop, it’s best to apply the brakes early and gently. This lets you more or less coast to a stop, which reduces the potential of skids.

The same goes for sharp corners, too.

Braking hard in the middle of a turn is a great way to make your scooter slide right out from under you. It’s far better to slow down to turning speed before you’re at the corner, then just cruise on through it.

You can think of tires as having a certain number of traction “points,” beyond which they skid. And if you use more of those points for braking, then there may not be enough left for a safe turn.

Sidewalk cracks and potholes and the like are really unpleasant surprises on an electric scooter.

With no (or little) suspension, it’s going to be a significant jolt at best.

And with wheels just 8″-10″ in diameter, even a couple of inches protruding can bring you right to a stop. Well, it can bring your scooter to a stop; your momentum may keep you going right over the handlebars.

That’s why it’s critical to keep an eye out for squared-edge bumps. If they’re impossible to avoid, then approach them at very low speed. We’re talking walking speed, more or less.

And if there’s any question of whether you can roll over the bump at all, then getting off to walk a few feet is the smart thing to do.

I have to admit that leaning into a fast turn is a lot of fun. There’s just no denying that.

However, it’s also one of the surest ways to crash your electric scooter.

You may be perfectly fine on nice, clear pavement. But it doesn’t take that much moisture or wet leaves or gravel to turn a fun ride into a painful one.

Those hazards sound easy to notice. On their own, they are.

But in reality, you’re also trying to watch traffic and pedestrians and many other things at the same time. Small but important details can easily escape your attention, so the risk of aggressive cornering simply isn’t worth the fun.

6. Keep a straight line through gravel

Just like it’s important to corner gently, you’ll also want to avoid cornering at all in gravel.

Of course, this also applies to significant sand, dirt, debris, and anything else that’s easily to slip on.

In those conditions, even a quick flick of the handlebars can break the tires loose.

Sometimes, there’s just no escaping a turn on bad surfaces. Perhaps the road or pathway has a big bend, so going straight is out of the question.

In that case, your best bet is to slow down significantly. As mentioned earlier, it’s best to go even slower than you think you need to.

At these speeds, your forward momentum is low enough that your tires can more easily hold on.

Furthermore, while turning, consider hanging your inside leg just above the ground. (That’s the leg toward the inside of the turn: left leg when turning left and right leg when turning.) You probably won’t be able to stop a crash if it happens, but it just might save you from an outright face-plant.

This last tip is perhaps the most important one of all. It has little to do with riding technique–like cornering and braking–but everything to do with awareness and mindset.

The unfortunate reality of riding around traffic is that some drivers just don’t see you, period. And others do…but they choose not to yield appropriately.

It’s infuriating and terrifying, but true.

The most rational strategy is just to assume you’re invisible.

It’s simple. Ask yourself, “What would they do if I weren’t right here?” Assume that they’ll do so, until proven otherwise. Even if it is your right-of-way, it’s not worth competing with thousands of pounds of recklessly driven steel.

This tip has saved my life on foot, on scooter, and on bicycles. Probably even more times than I can count.

It’s sad that this sort of paranoia is necessary, but in most scenarios, it’s simply the prudent approach.

It’s always worth checking that brakes are in order, too, especially if you’re on a rental.

Finally, I recommended riding under the assumption that nobody sees you. Even though it’s pessimistic, it’s also the best way to avoid the nasty surprises of riding around traffic.

A lot of this will become second nature as you build up experience. For now, get out there, take it easy, and have some fun while you’re at it!

P.S. The difference in safety from a beat-up rental to your own scooter is significant. Nothing is foolproof, but at least you know where it’s been! For my money, the Ninebot Max is the best (and safest) scooter at an accessible price. I’m particularly impressed by its smooth ride quality and terrific braking. Read my review here for more information.